>¦ Hun cauldron dating from the 4th or 5th century. This bronze vessel was found at Toertel, Hungary. The nomadic lifestyle of the Huns necessitated the making of easily portable cooking vessels such as this cauldron. The Huns were excellent equestrians and the finest examples of their art are items associated with the horse, such as saddles and rugs.

The Romans' failure to conquer Germany was a cause in the downfall of its Empire. Despite the best efforts of Julius Caesar (100-44 bc), Augustus (63 BC-AD 14), Tiberius (42 bc-ad 37), and later emperors, the Romans never controlled more than a small part of southern Germany and a fcx)thold in the north. Although adjacent Germans had been 'tamed' to a considerable extent, beyond their frontiers lay largely unknown territory, within which population accumulated and ’ agglomerated into warrior-bands and confederations. Tension on the borders of Germanic peoples began the process of collapse within the Empire itself.

Population pressures, and the lure of Roman wealth, created a very unstable society in which many groups adopted a semi-permanent state of migration. These groups constantly moved around the perimeter of the Roman world, probing for points of weakness.

Even in the 2nd century ad, during Rome's 'golden age', the German threat was real and ever present. In the 170s, large numbers of Germanic peoples crossed the middle Danube and penetrated deep into the Empire. One group crossed the Alps and besieged the city of Aquileia on the borders of Italy. Another group attacked the sanctuary of Eleusis in Greece with considerably more success than the Celts at Delphi some 450 years earlier.

The situation deteriorated further in the middle of the 3rd century, when many German groups breached the Danube frontier. In 251, Emperor Decius (c. ad 201-51) was killed in battle against the Goths, who had migrated from southern Scandinavia to the northern Black Sea region. In 268, a concerted Gothic attack was defeated at Ni§, Serbia, and other Germanic groups, such as the Alemanni, were driven out of north Italy in the next two years. During this state of emergency, the western part of the Empire came under the control of a short-lived dynasty of 'Gallic' emperors, and Queen Zenobia (d.275?) briefly separated Syria and Egypt from Rome. After 274, the Empire was reunified by Aurelian (c.212-75) and his successors, albeit with the permanent loss of Dacia (now part of Romania).

In C.370, the final collapse of the Roman Empire was precipitated by the arrival in southern Russia of large numbers of Huns, warrior equestrians from the eastern steppes near the borders of China. Other peoples were pushed westwards, and both branches of the Goths - Visigoths and Ostrogoths - spilled across the Danube and killed Emperor Valens at the Battle of Adrianople (now Edime, north-west Turkey) in 378. Faced with this fait accompli, the Romans 'permitted' the Goths to settle within the Empire.

In 395, the Roman Empire was separated into western and eastern empires, formally acknowledging

A German invasions Germanic raids were a constant threat to the Empire during the 3rd and 4th centuries. The northern frontier was breached many times, and some raids penetrated deep into Roman territory before being turned back by a combination of force and bribery.


>¦ German invasions 5th century ad The distances travelled by the Germanic invaders varied greatly. For instance, the Franks had a relatively short journey, while the Vandals migrated to the opposite shores of the Meditterranean.


A situation that had existed for most of the 4th century. The Eastern (Byzantine) Roman Empire sur ived and endured for another millennium, but the Western Empire was doomed. In 406, the Rhine frontier was breached and thousands of Germanic warriors fielded into Roman territory. Within 70 years, the city of Rome was sacked three times and the whole of western Europe, with the exception of the extreme western fringes, came under the control of Germanic groups.

The fall of the Roman Empire During the first decade of the 5th century, the Burgundians established control of central France and the Vandals conquered Spain. In 408-09, the Visigoths, under Alaric (c.370-410), invaded Italy and sacked Rome in 410. Bribed by Pope Innocent I (d.417) to depart, they established a kingdom in southern France, which they used as a platform to invade Spain. The Vandals, led by Gaiseric (d.477), were forced to evacuate to north Africa, where they quickly established control, seizing the city of Carthage in 439. Meanwhile, north-east Gaul came under the control of the Franks, who settled in large numbers. The peasant leader Bagaudae held northwest Gaul, while much of central Gaul was ruled by the Roman General Flavius Aetius (d.454).

During the 440s, the Huns, under their elected leader Attila (d.453), ravaged the Balkans, but were eventually bribed by the Eastern Roman Emperor Theodosius II (410-50) to turn westwards into France. In 451, Attila was defeated by a combined army of Roman and Visigoths under Aetius at the Battle of the Catalaunian Plains, near present-day Chalons-sur-

Mame, north-east France. The Huns were deflected into northern Italy, which they continued to plunder until forced to withdraw by Attila's death.

In 455, Vandal raiders sacked Rome and captured Emperor Avitus' (d.456) wife and daughters. In 476, the Empire itself was overthrown when the German mercenary-general Odoacer (c.433-93) seized power from Emperor Romulus Augustulus and declared himself king of Rome. In 493, Odoacer was 'replaced' by the Ostrogoths, who established the kingdom of Italy.

Meanwhile, the Franks had conquered most of Gaul. In 481, Clovis I (c.466-511) established the Merovingian dynasty, which was to conquer the Burgundians and form the basis of the medieval French state. The other newly gained Germanic territories proved less enduring. In 533, the Eastern Roman (Byzantine) Empire crushed the Vandals in north Africa. In the 7th century, the Byzantines themselves were driven out of north Africa by Islamic Arab and Berber armies, who went onto conquer Spain from the Visigoths.

Other groups arrived in the 6th century, causing further disruption. Between 530 and 550, Slavs moved into the Balkans and established territorial kingdoms; and the Avars occupied Carpathia. In 568, the Germanic tribe of Lombards invaded Italy and established a kingdom in the north. By this time, Roman political power was well and truly extinct. Roman political influence was, however, somewhat maintained through conversion of the German rulers to Christianity and the creation of a spiritual 'Roman empire' by the early popes.

A Attila the Hun by Cristofano deirAltissimo(1530-c.1605). Above this portrait of Attila appear the words Flagellum Dei (Latin, 'scourge of God'). Attila built an empire in the southern Balkans and Greece, before attacking the Western Roman Empire in its heartlands in Italy and Gaul. He reached as far as modern-day Orleans, central France, before being forced to withdraw from Gaul by an army led by the Roman General Aetius and the Visigothic King Theodoric I. 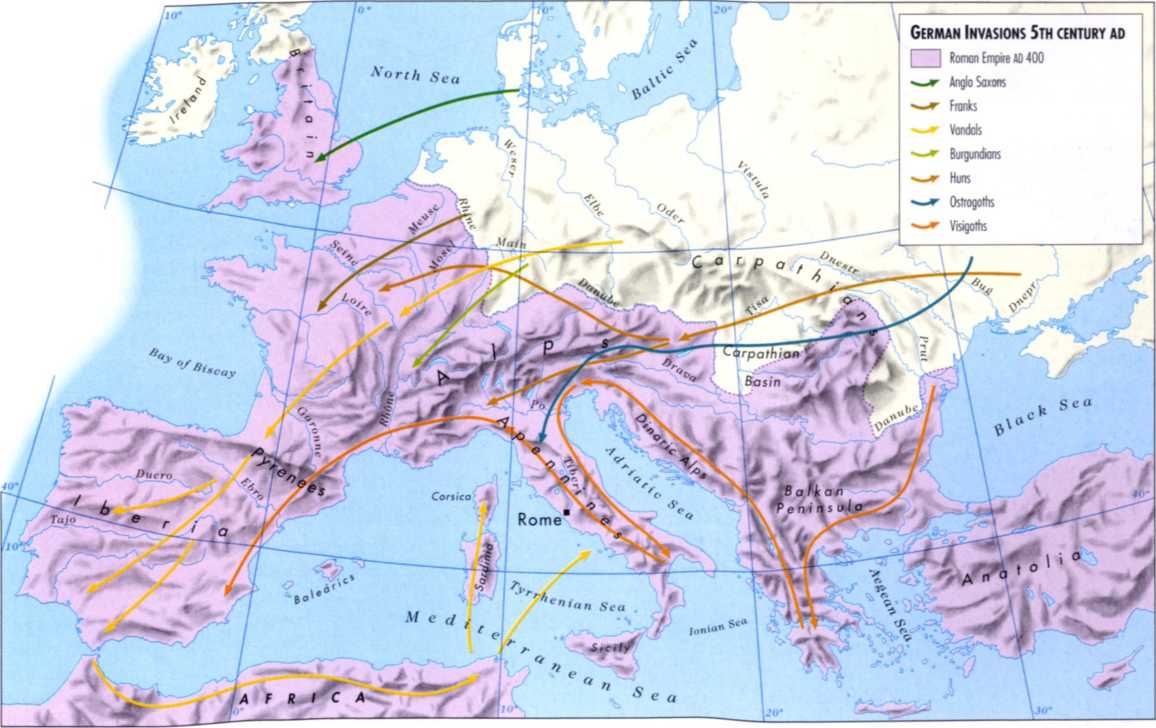