The site of Bruchenbrucken lies about 5 kilometers south of Friedberg, Germany, in the Wetterau region, a loess plateau between the Taunus hills and the Vogelsberg and Spessart massifs. Excavations were conducted during the early to mid-1980s in the course of a research project based at the Johann Wolfgang Goethe University in Frankfurt, Germany. A new excavation campaign began in the spring of 2003 as housing development in the area continued. Bruchenbrucken is a multicomponent site with features dating to the earliest Linear Pottery culture (called Linearbandkeramik, or LBK, in German; LBK I c. 5400-5250 b. c.), younger LBK (LBK II c. 5250-5000 B. C.), Middle Neolithic (c. first half of the fifth millennium B. C.), and Bronze Age (unclear dates at this site).

The site became famous for its earliest LBK component, notably the association of classic earliest LBK material with that of another Early Neolithic tradition from western and west-central Europe 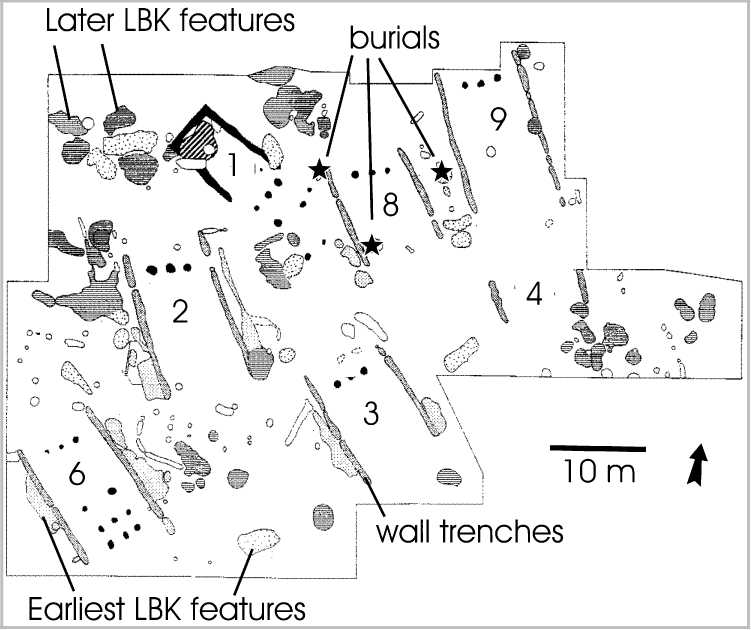 
Known as “La Hoguette.” This contemporaneous occupation would have taken place between 5350 and 5250 b. c. The site plan (fig. 1) shows the remains of six houses dating to the earliest LBK (2, 3, 4, 6, 8, and 9) and one (1) dating to the younger LBK. Earliest LBK houses are arranged in two rows and are oriented in a direction that is roughly NNW-SSE, the southern row showing a slight turn toward the west. Because of the close proximity of the house plans to one another, it can be ruled out that they were contemporaneous. It seems more likely that neighboring structures represent succeeding buildings, with the new structure erected close to its predecessor. Owing to continuous occupation of the site during the LBK period and resulting disturbances in the extraction pits alongside houses, it has not been possible to seriate archaeological material in more than a very rough order. Another problem has been the numerous vessel refittings (reconstruction of ceramic vessels with sherds to achieve a possible idea of the original vessel’s shape and decoration), notably from houses 2, 3, and 6. As a result of these taphonomic problems,

A stable internal earliest LBK chronology could not be established. At the end of the earliest LBK there seems have been a hiatus, and the site was resettled at an advanced stage of LBK II, after about 5200 B. C. At that point Bruchenbrucken became occupied continuously, until the end of the LBK in about 5000 b. c.

The archaeological material recovered from the site shows wide-ranging links to surrounding regions. About 80 percent of the lithic material from the earliest phase came from the Maas Valley, which lies at a distance of250 kilometers. There are, however, no LBK sites dating to this period between the Wetterau and the Maas, so the large amount of “exotic” flint needs explanation. It may be linked with La Hoguette pottery (fig. 2). La Hoguette is a ware attributed to Late Mesolithic forager-horticulturalists (who had adapted small-scale agriculturalist practices) that is distributed across a wide area along the Rhine and its adjacent uplands and reaches as far as the English Channel in northern France. The ware can be distinguished from LBK pottery by shape, texture, and decoration tech-


Nique. In addition to La Hoguette ware, a triangular point was excavated from an earliest LBK pit. Formerly such items were mistakenly called “Danu-bian points” because of their abundant appearance on western LBK sites. It is now clear that they actually represent a central and western European Late Mesolithic tradition. Not unexpectedly, this point also was manufactured out of Maas Valley flint.

Apart from the typological differences, there are two different blade-manufacturing techniques. The shape of a few blades shows clear traces of a western European Late Mesolithic core-reduction tradition, while the majority of blades were produced in the technique of the central European Late Mesolithic and Early Neolithic. These lithic traditions are technologically exclusive of each other and result in differing end products; both are regionally exclusive as well.

Thus at Bruchenbrucken there are two differing pottery traditions, two distinct lithic traditions, and raw material imports in considerable quantity from an area that was not, at the time, settled by LBK villages. Considering the entirety of this evidence, one might justifiably think of two discrete yet contemporaneous ethnic groups that interacted economically and certainly also socially. One group, the manufacturers of La Hoguette pottery and triangular points, has local Late Mesolithic roots. These people had come under the influence of innovations ultimately going back to the southern French Mediterranean coast. New evidence from pollen profiles taken a little distance from Bruchenbrucken shows that the environment had been altered artificially as early as 5700-5000 B. c. Heliophytic (sun-loving) plants increase in number, and Plantago lanceolata (a weed associated with animal husbandry) indicates a human presence. Pollen from a poppy variety indigenous to southern France (Papaver setigerum) shows that the innovations would have come from this direction. There also were slight indications of cereal pollen of an undetermined variety. The changes in the composition of the natural vegetation can be attributed to an economy that was based on horticulture and some stockbreeding, notably sheep and goats.

There are numerous sites in central Europe where some remains of sheep and goats, and also cattle, have been found in Late Mesolithic layers. The most revealing site is Stuttgart-Bad Cannstatt, where a layer with La Hoguette pottery and evidence of a western European Late Mesolithic lithic tradition has been excavated, first in the 1960s and then during the early 1990s. The analysis of the newly available faunal and botanical material showed that the site was occupied briefly by a small band during the spring and fall seasons. The group had rested at the location for only a few days and then had continued with its yearly exploitation cycle (yearly or seasonal exploitation of the natural environment). Domestic animal remains belong to sheep and goats that were slaughtered on the spot and prepared for a meal, as is indicated by the presence of a spice weed (Allium ursinum, or wild garlic).

Other remains stem from the local, typical wild fauna, such as red or roe deer, aurochs, and many smaller animals. Wheat pollen shows that cereals were consumed at the site. It is likely that wheat was not grown at this location but was brought in from elsewhere, maybe from LBK farmsteads. Because the occupation dates to 5500-5300 b. c., it cannot be ruled out that the people of Bad Cannstatt had contact with the earliest LBK sites, some of which lie close together. It is thus not impossible that wheat was obtained through exchange with farmers, but no definite artifacts of LBK origin have been found.

Stuttgart-Bad Cannstatt is a site type complementary to the LBK settlement of Bruchenbrucken. It was not maintained by LBK farmers but by La Hoguette forager-horticulturalists. Both sites give insights into the complex interrelationship and coexistence of two different populations at the transition from the Mesolithic to the Neolithic in central Europe.