There are, however, some domains where the presence of individuals or groups of foreign origin is more likely to have left archaeological traces.

Funerary custom is a domain, as so many ethnographic studies show, often closely linked in traditional societies to religious belief and cult practices, to ideas and rituals embedded deeply enough in the group sense of identity that they can long survive uprooting from the original environment. Even when that environment was polytheistic, and the migrants entered a Christian world,1026 groups preserved older funerary customs, albeit shifting their meaning more toward affirmation of social status, it seems, as the group moved toward conversion. Nonetheless, we should not draw too fixed a line between barbarian and Roman funerary custom in late antique Gaul. For example, the decorated military belt-sets found so widely in northern Gaul and along the limes in the fourth - and early fifth century should not be taken, by themselves, as a necessary sign of German presence, as has sometimes been too systematically claimed, especially because they are found primarily on and inside the frontier rather than in barbaricum: they seem rather to be a manifestation of late Roman military culture that was shared by barbarian auxiliary troops.1027 (See Fig. 23.5.)

On the other hand, when cremation graves, or burials under tumuli, or horse burials are found within the frontiers,1028 we plausibly can attribute them to recent barbarian immigrants, for such funerary customs do point to barbaricum. Indeed, it may be because they so closely associated with barbarians that they seem to 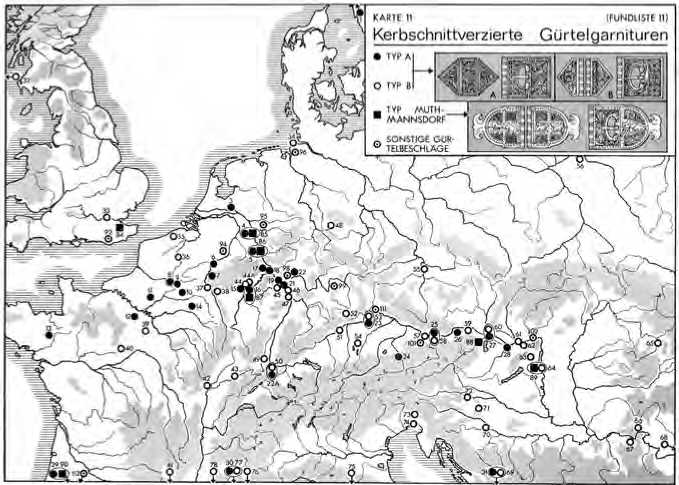 Have been tolerated or ignored by the church, for no liturgical texts of that time denounce them, perhaps because they were seen as a social or ethnic rather than as a religious choice.1029 And it would be quite impossible to tell the difference between a barbarian integrated into Roman society and a Roman who went to live outside the frontiers and was buried according to the customs of his adopted community, except perhaps, in exceptional cases, through physical anthropology.1030 Nor is an ethnic reading of the funerary practices of the barbarian elite always possible, as it was in the case of Childeric. In addition, the two greatest Germanic rulers of the early sixth century, Theodoric in Ravenna and Clovis in paris, were buried with monumental splendor borrowed from the imperial and Christian models.

Ethnographic customs can be good markers of social identity, even if their correlation with specific ethnic groups is sometimes uncertain. An example is the artificial deformation of skulls, a practice first attested in Europe among the Alans and Sarmatians of the first and second centuries.1031 (See Fig. 23.6.) But when the Huns were dominant during the early fifth century, this custom spread among other barbarian peoples, which should make us careful about ethnic attributions, even for early examples, for in many cases the precise date of the grave of a deformed-skull subject is uncertain. Nevertheless, sometimes an ethnic identification can be plausibly argued; the individual in a grave in the late Roman cemetery at Strasbourg (a grave oriented west-east like the majority) was probably an alano-sarmatian integrated into the Gallo-Roman population.1032 and even in instances when we cannot exactly specify to which ethnic group such an individual belonged, we can say that the ethnographic custom points to the Iranian-language milieux of the steppes.

A case, unique in Gaul for the moment, of ethnic background being reflected in funerary customs may concern human sacrifice. At a Germanic sanctuary discovered at Arras beside military barracks, the ditches surrounding it served for the burial of both men and animals.40 After decomposition, certain body parts, notably the skulls of human adults and children and animals, were removed and placed in a large square ditch in the center of the site, protected by a small wooden building. Here, written sources as well as the presence of fibulas typically of the lower Elbe region suggest that these practices should be attributed to Germanic auxiliaries in Roman service.41

Where warfare was concerned, late antique authors make it clear both that barbarians fought differently from Romans, and that they also differed from one another in preferred weapons and tactics.42 post-sasanian treatises specify, for example, that Sasanid weapons training began during childhood (at age 6 for 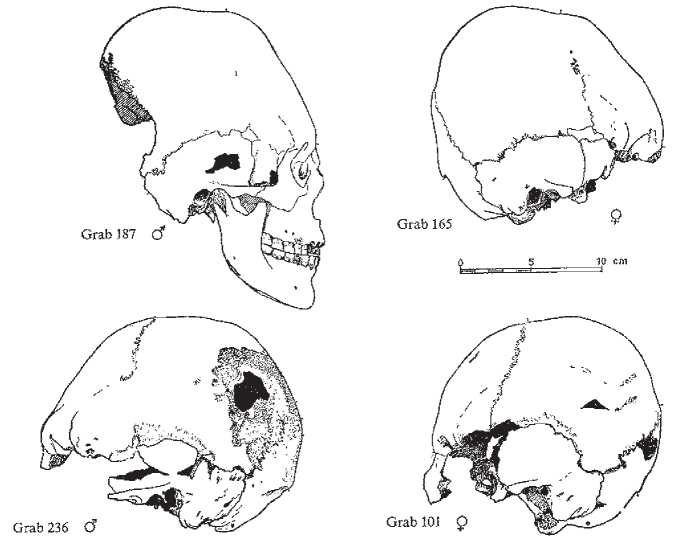 Archery),1033 suggesting that military techniques and weaponry were culturally rooted, and also can serve as ethnic markers. It is not by chance that the distribution of franciscas (famously identified as the Frankish weapon of choice)1034 and angons1035 between the Rhine and the Seine fits with the Frankish conquest of those regions by Clovis from 486, and their presence in southwest Germany is consistent with the establishment of Frankish protectorates there from 506.1036 (See Fig. 23.7.) At the same time, other characteristic types of weapons were used throughout barbarian Europe, notably long swords and most types of spears and arrows, although the three-barbed arrowhead is specifically associated with steppe nomads.1037

Many ethnographic studies stress the culturally conservative role of female costume in traditional societies, assigning it a quasi-sacral quality that was closely controlled. Archaeologists, too, have been struck by the importance of women’s costume as an ethnic marker. (See Fig. 23.8.). Among eastern Germans, women during the later fifth and sixth centuries wore at the shoulders a pair of large roundheaded fibulas that fixed the garment, or peplum, according to ancient custom. Among western Germans at that time, women wore fibulas of that general type at the waist, with a second pair of smaller brooches worn on the chest or at the neck (the so-called “two paired fibulae” fashion). The latter pair clearly served to secure a robe or a veil, but the function of the lower pair is subject to discussion. Some authors think they had a practical function, such as securing the lower part of the dress or closing a textile belt; others see them as purely ornamental, decorating strips of leather or of cloth material festooned with pearls that might have hung from the belt—there are iconographic mediterranean parallels.1038

It is interesting to note that the graves of women with two sets of fibulas correspond to the time (late fifth - to mid-sixth century) and place (northern Gaul and its eastern and northern margins, notably in Alamannia) of the construction of the Merovingian monarchy under Clovis and, like contemporary weapons graves,


Account for a minority of graves in a given cemetery,1039 suggesting that they denote ethnically conscious west-German women of the new Frankish elites. It has been suggested, for example, that the grave of a woman wearing exotic ornamentation in traditional foreign style can be taken as a sign of a foreign woman, no doubt an immigrant, keeping up her ethnic identity.1040 There are many examples of this for late antique Gaul, particularly with some Visigothic women, as at Lezoux (puy-de-Dome) (see Fig. 23.9) or grave 359 at Saint-Martin-de-Fontenay (Calvados).1041 some scholars also have sought to identify women from the provincial Roman population by other costume markers, such as the presence of a single pair of small fibulae at the neck, or grave goods limited to a belt-buckle along with a comb or a large bead.1042

Sometimes, women with Visigothic objects show signs of probable acculturation. A woman at Vicq (Yvelines), grave 756, for example, wore not only large round-headed fibulae at the shoulders and a cloisonne plate-buckle in classical Visigothic fashion, but also sported a pair of little zoomorphic brooches on her chest, in the local “two paired fibulae” style.1043 (See Fig. 23.10.)

Similar blurring of ethnic identity is manifested when we find an exotic item either in an incomplete assemblage (only one fibula instead of a pair, for example) or not worn in the proper place, as seen in the examples of three women from northern Gaul. A woman buried at saint-Germain-de-Fontenay, grave 741, wore at her waist a Visigothic plate-buckle but at her shoulders a pair of Frankish fibulae in the Visigothic manner.1044 (See Fig. 23.11.) On the contrary, a woman at Nouvion-en-Ponthieu (Somme), grave 140, wore not only a pair of Visigothic fibulae at the waist in the Frankish manner but also a pair of zoomorphic fibulae of 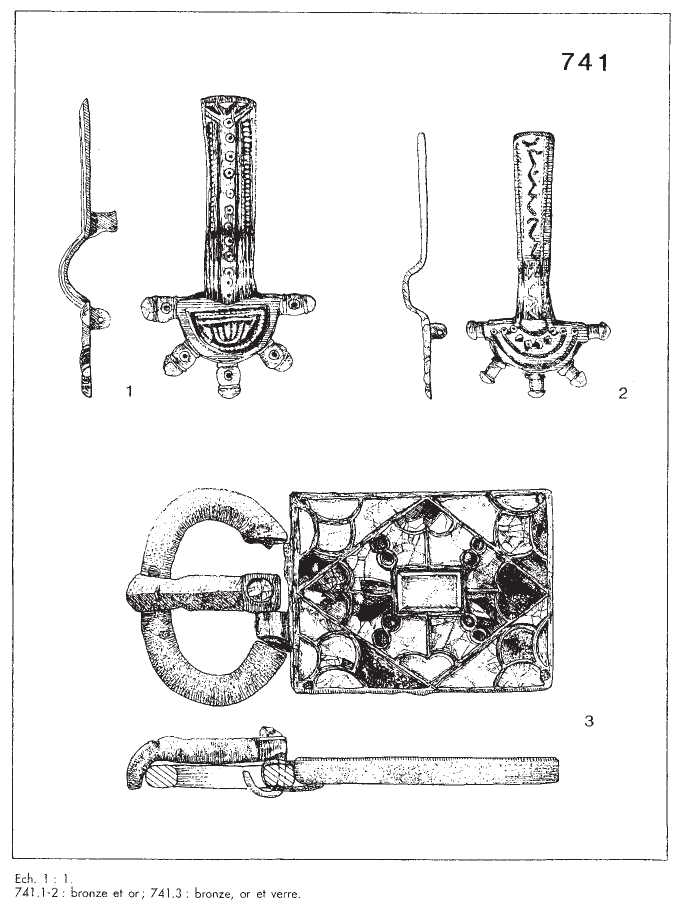 Local type at the neck, following the local “two paired fibulae” fashion.1045 At Cutry (Meurthe-et-Moselle), grave 859, a third woman, with a Visigothic plate-buckle, was no doubt paying tribute to the local Frankish style by wearing at the waist a simple eagle-fibula of Visigothic style.1046 These examples suggest that women of Visigothic origin were becoming assimilated to Merovingian society without altogether losing the memory of their roots.

A last example of a composite costume suggesting acculturation still in progress is grave 118 at Louviers (Eure).1047 (See Fig. 23.12.) This lady wore two pairs of brooches, in the local fashion, one at the neck and one at the waist, but the upper pair was Anglo-saxon in type, whereas the lower pair were not classical western Germanic “fibules ansees asymetriques” (“asymmetric bow fibulae”), but round cloisonne brooches, a Mediterranean type common in Visigothic lands. This woman also wore a classic Visigothic cloisonne plate-buckle. Where she came from is impossible to determine.

In many traditional societies, even today, pottery handmade by women is reserved for domestic use. Because it is not traded, this type of ceramic reflects local community traditions, passed along within families. in northern Gaul we sometimes find handmade wares of Thuringian type, or along the Channel and North Sea coasts others of Anglo-Saxon type that can be taken as signs of migration from these areas. Analysis of the paste sometimes reveals that these vases were made from clay not native to the presumptive home region, but from closer to the find-spot. This is no surprise. Although some vessels may have survived the migration along with their owners, what we find are more often reproductions of the native form made with local resources. Excavations at Erstein in Alsace, for example, where funerary practices—wooden burial chambers, tumuli, horse burials, and so forth—as well as the grave goods point to an immigrant military community, reveal handmade pottery, of both Thuringian and Saxon types, made with local clays.1048 “GermanicAnimal Style” Ornament

The “Germanic animal style,” so identified by Bernhard Salin in 1904,59 originated in northwestern Europe in the fifth century and featured intricate animal motifs, with boars’ heads, wolves, birds of prey, sea monsters, and fantastic animals, with long serpentine bodies interlaced together, wholly or in pieces, and filling every space. It often has been considered to have been a cultural expression of Germanic polytheism, not only in scandinavia and Germany, but also in the western Christian kingdoms of Gaul or Italy, where one later finds these motifs associated with Christian symbols or even on liturgical items.60 scandinavian scholars have proposed a more political and social reading of these motifs, suggesting that they served as heraldic emblems affirming the power of great lineages in the northern world.61 Along with “degenerate” popular interpretation of this style, a “pure” form developed in elite milieux as at saint-Denis, a famous Christian burial place used by the Neustrian court of paris.62 As in the north, it is possible that these zoomorphic motives affirmed a prestigious Germanic cultural heritage, reaffirmed in Romano-barbarian kingdoms in the late sixth and seventh centuries.