Books Translated from Persian into Turkish

The printing of books translated from Persian into Turkish during the classical Ottoman period constitutes one more manifestation of the abovementioned ‘three tongues’ tradition of Ottoman culture. Some of these works, too, were printed in Egypt before being printed in Istanbul. An example is the tales of Shaykh Ziyaoddin Nahshabi (d. 751/1350), known as the Tutiname (Tales of a Parrot), which were translated by San Abdullah Effendi and printed four times at Bulaq between 1253/1837 and 1267/1850-51. This work was not printed in Istanbul, however, until 1256/1840. Similarly, the Kalila wa-Dimna tales, which were translated from Arabic into Persian by Hoseyn b. ‘Ali Va‘ez-e Kashefi (d. 910/1505) under the title Anvdr-e Soheyli (The Lights of Canopus, or the Radiance of [Minister] Soheyli) and then into Turkish under the title Kitab-i Humayunname, were also printed at Bulaq in 1251/1835 and 1254/1838. This kind of book was required reading for the Ottoman man of culture of the period, and when Muhammad ‘Ali, and then his son Ibrahim Pasha, died, they ceased to be printed.

In addition to the above, the Turkish translation entitled Mesnevi-yi manevi li-Mevldnd Celdleddin-i Rumi made by Mehmed Suleyman Nahifr (d. 1151/1738) of Jalaloddin Rumi’s Masnavi known asMasnavi-yi ma‘navi (The Spiritual Masnavi) was accorded great importance and printed in Egypt in 1852, along with the Persian original, in seven volumes. The commentary on the Masnavi by Shaykh ismail Ankaravi (d. 1631) was printed in Egypt in 1835 in six volumes.

Among other works translated from Persian into Turkish and printed in Egypt that were accorded great importance was a book on Sufism by Hoseyn b. ‘Ali Va‘ez-e Kashefi entitled in Turkish Re§ahdtayn ol-hayat (The Upwellings of the Spring of Life), translated by Mehmed §erif el-Abbasi (d. 1002/1593-94) and printed in 1256/1840 and 1269/1852-53. The translation from Arabic into Persian of the Tafsir al-Jalalayn (The Commentary [on the Qur’an] of the Two Jalals), undertaken by Shah Valiollah b. Shah ‘Abdorrahim-e Hendi Dehlavi and entitled Fath or-Rahmdn and in turn translated into Turkish 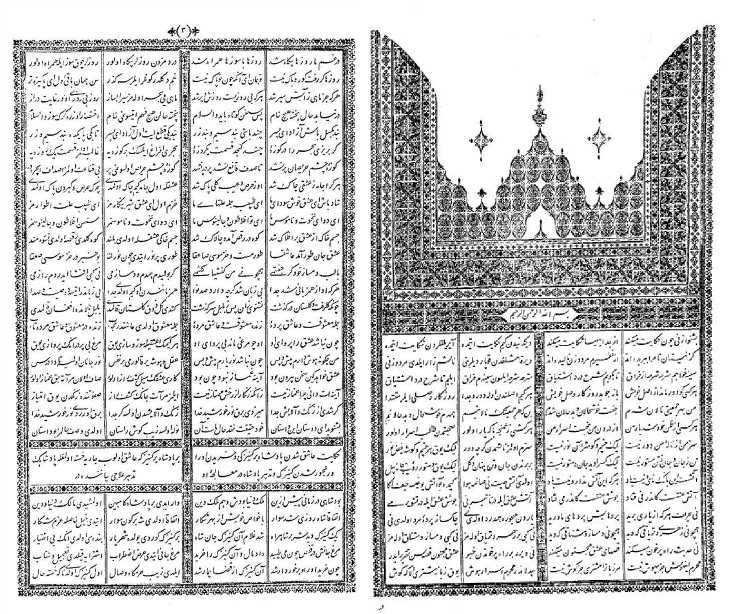 
Under the title Kitab el-Tefsir el-Cemali aid el-tenzil el-Celdli (The Inclusive Commentary on the Sublime Revelation), was printed in four volumes in 1294/1877. Another work belonging to this group is the Deldil-i nubuvvet-i Muhammedi ve §emdil-i futuvvet-i Ahmedi (The Evidence for Muhammad’s Prophethood and the Noble Qualities of Ahmad’s Gallant Nature), which is a Turkish translation of a Persian work on the history of the prophets and the life of the Prophet Muhammad entitledMa ‘drej ol-nobuve fi maddrej ol-fotove (The Ascents of Prophethood on the Steps of Gallantry) and written by Molla Meskin, which was printed at Bulaq in 1271/1855.

Another work printed in Egypt during these years was the Tarih-i Taberi (Tabari’s History), a translation of the celebrated Tarikh al-umam wa-l-muluk (History of the Nations and Kings) of Abu Ja‘far Muhammad b. Jarir al-Tabari, the great Muslim scholar and historian. It is a universal history, albeit with Islamic history as its foundation, and was translated from Persian into 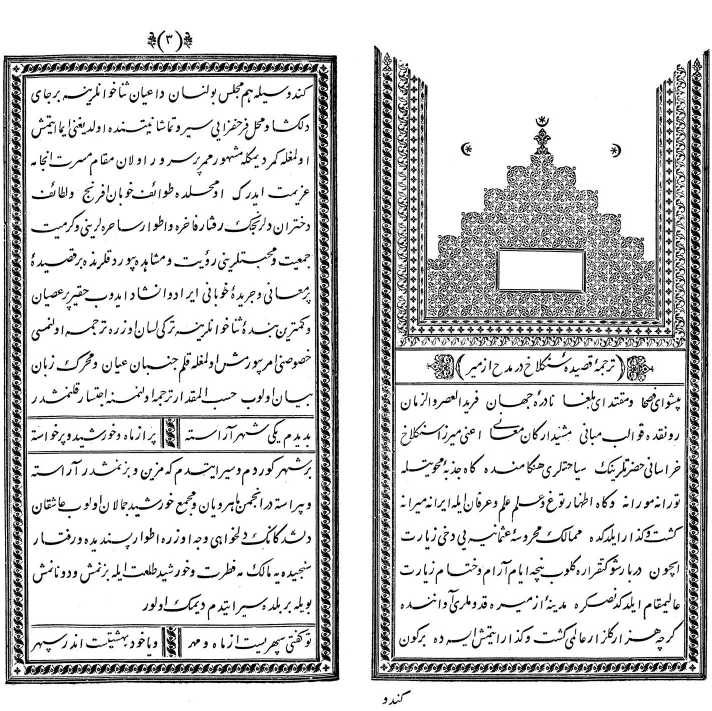 Turkish and other languages. The Turkish translation was printed for the first time in Istanbul in 1844, and then in Egypt in 1858-59, in five parts. The edition produced by the press of the Diwan ‘Umum al-Madaris (General Schools Council) in 1301/1884 was translated for the use of students learning Turkish. The translators of both versions remain unknown.

The Tercume-i Kaside-i Senglah der medh-i Izmir (Translation of Sen-glah’s Ode in Praise of Izmir) that was printed in Egypt in 1261/1845 occupies a place of particular distinction among other books in this group in that it is a locally produced Egyptian translation into Turkish of an ode in Persian written by the Khurasanian calligrapher Mirza Senglah (d. 17 Safar 1294/3 March 1877) about the Turkish city of Izmir.4

The last translation of a Persian work into Turkish to be printed in Egypt was the Qay risalesi (Treatise on Tea) of Ebu el-Hayr Ahmed Effendi b. Mustafa Rasih Effendi (d. 1154/1741), which was printed in the same volume as Havass-i biberiye (The Properties of Rosemary) and §ifa el-fuad (The Heart’s Cure) in 1300/1883.