The painters esteemed in antiquity, however, were not pot painters, but those artists who painted great narrative panels hung on the walls of public buildings. We know the subject matter and something about the techniques used, thanks to the comments of ancient authors, but the actual paintings have disappeared. The ancient writers ignored decorated pottery; the manufacture of pottery was considered a craft in ancient Greece, so its makers had little social status. But pottery has survived well, in contrast to the panel paintings. The habit of the Etruscans, a non-Greek people of central Italy, of including imported Attic (= Athenian) vases among their grave offerings has guaranteed a good supply of complete examples (for the Etruscans, see Chapter 19). Indeed, the museums of Italy, Western Europe, and North America are filled with complete pots excavated, or looted, from Etruscan burials. When we think of Greek painting, it is this decorated pottery that springs to mind.

The leading producer of decorated pottery in the Archaic and Classical periods was Athens, replacing Corinth, the city whose ceramic industry dominated in the Orientalizing period. Athenian potters and painters used two main techniques: black-figure and red-figure. To these a third would be added in the fifth century BC, white-ground (painting on a white background). Black-figure developed smoothly from Protoattic, the seventh-century style in Athens. Figures and decorations were painted in black onto a background of unpainted orange-red, the distinctive natural color of the clay of Athens (see Figure 14.3). Details were incised before fir-Figure 14.3 The Nessos Amphora. ing, fine lines cut through the black to expose the orange-red found in Athens. National color below. The black itself was not actually a paint, but was

Archaeological Museum, Athens  a refined solution of clay; with its finer particles, this paste was more compact than the clay used for the pot and reacted differently during the firing process. When applied by the artist, this “paint” would have an orange-red color similar to that of the background. Only later during the firing, thanks to careful manipulation of the chemical reactions of the ferric oxide in the clay and the paste, would the distinctive contrast between red and black be achieved.

The normal sequence of firing consisted of three stages: (1) oxidation: oxygen is let into the kiln; the clay and the “paint” stay red; (2) reducing: the air vent is closed, cutting the oxygen supply; the fire heating the kiln takes oxygen from the ferric oxide in the clay; the ferric oxide (Fe2O3) turns into black-colored iron oxides (either FeO or Fe3O 4); and (3) partial reoxidation: oxygen is let in again; the black pot returns to the original red; the more compact “paint” will do the same, but more slowly. The firing process needs to be stopped in the middle of this change, after the pot has turned red but while the “paint” is still black. Getting this right took skill; many pieces show failure.

Red-figure was simply the reverse: the background was covered with black, whereas the figures and decorations were left in the natural clay color, orange-red (see Figure 14.4). Details were added into the figures with the concentrated clay solution, which would turn black in the firing; incision of lines was not used on red-figure vases. Red-figure was developed ca. 530 BC as an alternative to black-figure, perhaps by the anonymous pot painter known today as the “Andokides Painter.” Both techniques continued to be used through the Late Classical period (fourth century BC) until the winds of inspiration finally died out and the public demanded something new.

Mythological subjects were always popular with vase painters. The Nessos Amphora is an example of late Protoattic, almost early Attic black-figure pottery that illustrates mythological themes (Figure 14.3). On the neck, the hero Herakles kills Nessos, a centaur. Both figures are labeled. Below, large gorgons, with wings and monstrous heads, chase Perseus, the killer of their sister, Medusa. 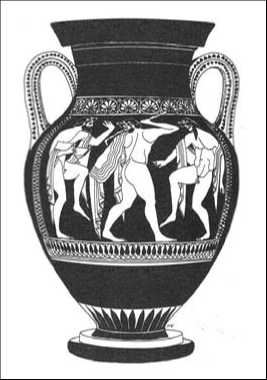 By the later sixth century BC, genre (daily life) subjects became increasingly popular. At the same time a major development in style took place, indeed one of the great turning points in the history of Western art. Twisting poses were now depicted in both vase painting and relief sculpture, giving the illusion of depth, of the third dimension. This interest in optical reality represents a major break with the profile-oriented two-dimensional depictions of figures standard in the art traditions of the Near East, Egypt, and Mediterranean basin. This change came about through experiments in drawing in the newly developed red-figure technique. Why this happened is not clear, but the broadened range of popular subjects, favoring daily life as well as mythological or sacred scenes, may be a factor.

A red-figure amphora decorated by Euthymides shows nicely these changes in both subject and drawing technique (Figure 14.4). The amphora, made ca. 510 BC, was found in an Etruscan tomb at Vulci, in central Italy. Three naked men, mature (as their beards indicate), are carousing in the street after a drinking party. One holds a drinking cup while another teases him with a staff. What is noteworthy is the attempt of the painter Euthymides to show these men — Figure 14.4 Three revelers, on an their torsos anyway — twisting or in three-quarter view. The

Antikensammlungen Munich  this, as does the foreshortened drawing of the chest of the man on the left, in which the right side of his chest is broader than the more distant left side. But this man’s right arm is too thin, so the perspective drawing seems distorted, inaccurate. These important experiments in foreshortening taking place in the workshops of Athens gave rise to rivalries between painters, as evidenced by the boast Euthymides painted on this vase: “as never Euphronios [could do].”