A sanctuary contained not only buildings but also objects offered in thanks for a great range of successful outcomes. Donors included individuals, as we have already seen, and also governments. At prestigious Delphi, a ceremonial center revered by the entire Greek world, the monuments erected by city-states included commemorations of some of their greatest triumphs.

The city-states rarely acted in concert; the major exception was the struggle to repel the Persian invaders in the early fifth century BC. In remembrance of those Greek victories, a series of important trophies were displayed or erected at Delphi. Spoils seized from the Persians at the Battle of Marathon in 490 BC were set out for public view at the Treasury of the Athenians (a building of the late sixth century BC), probably in the triangular space along its south side. Further

Up the Sacred Way, the Stoa of the Athenians (usually dated to 478 BC) sheltered another prize captured by the Athenians, prows from the boats that formed a pontoon bridge erected across the Dardanelles (Hellespont) by the Persian King Xerxes, and cables that lashed them together. Like the spoils from Marathon these items have long vanished, but an inscription in large letters that survives on the front of the top step of the stoa gives the vital information (Figure 15.4).

Another monument celebrating a victory in the Persian Wars stood just to the east of the altar of the Temple of Apollo: the Serpent Column, honoring the victory at Plataea in 479 BC. Three intertwined serpents of bronze rose straight up, their heads flaring out to create a base for a gold tripod. The lower coils were inscribed with the names of the city-states who joined together to defeat the Persians. At Delphi, only the circular, stepped base of stone on which the column stood can be seen. Miraculously, much of the column has survived, not in Delphi, though, but in Istanbul. The Serpent Column was one of many items brought by Constantine from different parts of the Roman Empire to Constantinople in the early fourth century AD to decorate and give prestige to his new capital city. Prominently displayed on the spina, the central division of the hippodrome, the huge stadium for chariot races, the ruined bronze column can still be seen today. The serpent heads have been knocked off, but one was recovered in the nineteenth century and is now exhibited in the Istanbul Archaeological Museum.

The monuments celebrating the triumphs over the Persians were exceptional. More typical were monuments that commemorated victories of one Greek city-state over another, evidence that the religious sanctuary served as a wide-open forum for publicity of all sorts. Close to the lower entrance of the sanctuary, for example, the Spartans erected a grand monument to celebrate their decisive naval victory over the Athenians at Aigospotamoi in 404 BC: two rows of bronze statues of the admiral, the ship captains, and gods, perhaps thirty-nine figures total. Opposite, as if to tweak Spartan noses, the Arcadians later put up a monument in 369 BC to their recent victory over the Spartans: nine bronze statues, showing Apollo, Nike (Victory), and seven Arcadian heroes. It is amusing to note that one of the four sculptors engaged by the Arcadians had earlier worked on the Spartan monument.

A different type of commemoration, the last to be mentioned here, is the honoring of athletic victors. Celebrations of Apollo included the Pythian Games, competitions in athletics and — because Apollo was considered an accomplished lyre player — music. In contrast with the three other major games at Olympia, Isthmia, and Nemea, the Pythian Games were held every two years, not every four. Events took place in the stadium uphill, just outside the temenos. 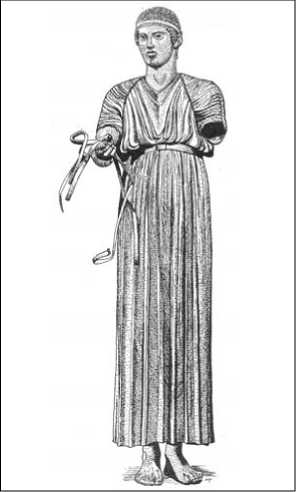 
Victors in games habitually presented thank-offerings to the gods. At Delphi, the best-known of such votives is a life-size bronze statue, the Charioteer of Delphi (Figure 15.5), the one figure to survive complete from a larger sculptural group consisting of a chariot drawn by four horses with a groom in attendance, placed in the sanctuary to the north-west of the Temple of Apollo. The group was dedicated by Polyzalos, tyrant of Gela, a Greek city in Sicily, to commemorate his victory in a chariot race in either 478 or 474 BC. Polyzalos was not the actual racer. In chariot races, in contrast with other events, the sponsor of the winning team counted as the winner, not the actual driver — a situation that resembles modern horse racing, in which the owner receives the trophy with horse and jockey looking on. The Charioteer, a young man, wears the costume of his profession, a high-belted tunic, with sleeves fastened down to avoid flapping during the race.

This statue was made by the lost-wax casting process, a technique developed in the Iron Age for making small bronze figurines. The casting of life-size bronze statues began in the later sixth century BC. The liberating effects on Greek sculpture were enormous. Life-size sculpture based on Egyptian models had been stiff and symmetrical. This technique of lost-wax casting allowed artists to express in bronze statuary a variety of movements heretofore never attempted in stone. Eventually the hugely expanded repertoire of motions achieved in bronze would be created in stone sculpture as well.

Typically, life-size statues such as the Charioteer consisted of several pieces first cast separately, later joined together. In this process, the image desired is created in a thin layer of beeswax applied over a clay core. A clay mold is then placed over the beeswax, and fixed in place by iron or bronze pins (chaplets) stuck across the mold and the beeswax into the clay core. The entire construct — mold, beeswax image, and clay core — is then heated at high temperature. The wax melts and runs out, leaving a thin hollow space; the clay elements are baked hard. Finally, the molten bronze is poured into the empty space previously occupied by the beeswax. When cooled, the clay elements are removed, leaving the cast bronze item, to be joined to other cast pieces and given finishing touches.

As was usual for bronze statues, the Charioteer’s eyes were made of white paste and, for the iris and pupils, shiny dark stone, to make the face seem alive — a convention we have encountered already in the Ancient Near East and Egypt. Whatever the impact of his shining eyes, his expression remains pleasant yet impassive, a personality type that attracted artists of the Early Classical period.