The relatively tolerant treatment of most Americans of German and Italian descent makes the nation’s policies toward American citizens of Japanese extraction all the more difficult to comprehend. Generals on the West Coast were understandably unnerved by the Japanese attack on Pearl Harbor and warned that people of Japanese descent might engage in sabotage or espionage for Japan. “The Japanese race is an enemy race,” General John L. Dewitt claimed. The 112,000 Americans of Japanese ancestry, the majority of them native-born citizens, were “potential enemies.” “The very fact that no sabotage has taken place to date,” Dewitt observed, “is a disturbing and confirming indication that such action will be taken.” This is like arguing that a driver with a perfect record is all the more likely to careen into a tree at any moment. Secretary of War Stimson proposed the relocation of the West Coast people of Japanese extraction, including American citizens, to internment camps in Wyoming, Arizona, and other interior states. President Roosevelt concurred but weakly suggested, “Be as responsible as you can.”

The Japanese were properly indignant but also baffled, in some cases hurt more than angry. “We didn’t feel Japanese. We felt American,” one woman, the mother of three small children, recalled many years later. Some Japanese Americans challenged military authorities. Gordon Hirabayashi, an American citizen and senior at the University of Washington, refused to report for transportation to an internment camp. After being convicted and sentenced to prison, he decided to appeal. Previous Supreme Courts had ruled that the government could deprive Americans of their freedoms during war only when the “military necessity” was compelling. By the time the Supreme Court ruled on his and similar cases, the Japanese military had been thrown back in the Pacific; no invasion was even conceivable. Yet the justices worried that if they declared the internment policy to be unconstitutional, they would appear, “out of step” with the nation, as Justice Felix Frankfurter put it. In June 1943, the Court upheld the conviction of Hirabayashi. Finally, in Ex parte Endo, it forbade the internment of loyal Japanese American citizens. Unfortunately the latter decision was not handed down until December 1944. 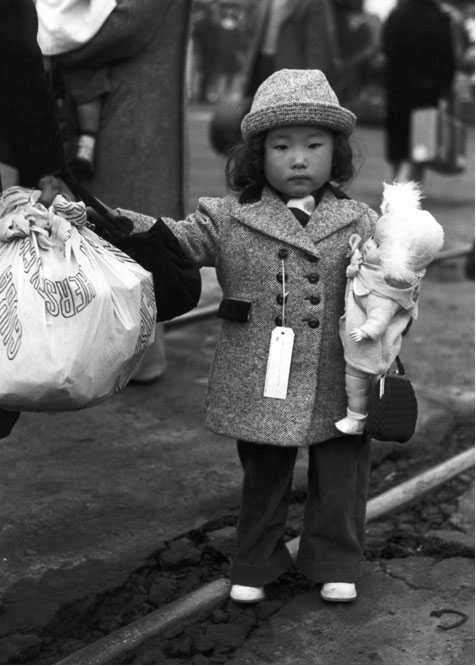 A Japanese girl in California, tagged for relocation to an internment camp, clutches her doll.