The Treaty of Paris had recognized the United States as an independent nation, Bnt it was not one nation as it is today. In 1783 most Americans felt more loyalty to their own state than to the new United States. They saw themselves first as Virginians or New Yorkers rather than as Americans. 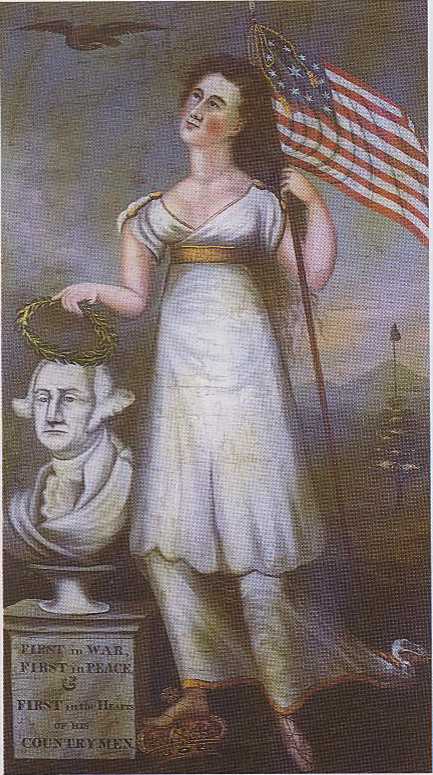 New  nnd places the laurel wreath of uietory on George

Each individual American state had its own government and behaved very much like an independent country. It made its own law's and its owm decisions about how' to run its affairs. The first big problem that faced the new' United States was how to join together these sometimes quarrelsome little countries into one united nation.

During the War of Independence the states had agreed to work together in a national Congress to which each state sent representatives. The agreement that set up this plan for the states to cooperate with one another was called the Articles of Confederation. It had begun to operate in 1781.

Under the Articles of Confederation the central government of the United States was very w'eak. It was given certain rights, but it had no power to make those rights effective. Congress could vote to set up a United States army and navy, but it could only obtain soldiers and sailors by asking the states for them. It could vote to spend money, but it had no power to coUect taxes to raise the money. This caused serious problems. When, for example, Congress needed money to pay debts ow'ed to France, some states refused to pay.

When the War of Independence was over, individual states began to behave more and more like independent nations. Some set up tax barriers against others. New York placed heavy import duties on firewood imported from the neighboring state of Connecticut and on chickens and eggs from another neighbor, Newjerscy. In some places states even began fighting one another to decide the ownership of particular pieces of frontier land.

The w'cakness ofits government made it difficult for the new United States to wun the respect or the help of foreign nations. The British felt that the American government w'as so weak that it was not worth dealing wdth. George III was sure that the Americans would soon be begging to rejoin the British Empire,

Even France, the ally of the Americans during the War of Independence, refused to recognize Congress as a real government. Thom as Jeffers on, now the American representative in France, wrote home sadly that the United States was the least important and least respected of all the nations with embassies in Paris.

Many Americans became worried about the future. Flow could they win the trust of other nations if they refused to pay their debts? Flow could the country prosper if the states continued to quarrel among themselves? George Washington was usually an optimist. But even he wrote: “I predict the worst consequences from a half-starved, limping government, always moving on crutches and tottering at every step.”

It was clear that for the United States to survive there would have to be changes in the Articles of Confederation. In February 1787, Congress asked each state to send delegates to a meeting or “convention,” in Philadelphia to talk about such changes. The smallest state, Rhode I. sland, refused, but the other twelve agreed. The meeting became known as the Constitutional Convention. It began in May 1787, and fifty-five men attended. They chose George Washington to lead their discussions.

The delegates to the Constitutional Convention disagreed about the changes that were needed. Some were anxious to protect the rights of the mdividual states. At the same time most wanted a stronger central govemment. All of them were rich men.

They believed that a stronger central government would protect their property and business interests.

The original purpose of the Constitutional Convention was simply to revise the Articles of Confederation. But the delegates did more than this. They started afresh and worked out a completely new system of government for the United States. They set out the plan for this government in a document called the Comtitutio)) of the United States.

The Constitution gave the United States a “federal” system of government. A federal system is one in which the powder to rule is shared. A central, or federal, authority has some of it and the rest is in the hands of local authorities in the separate regions that make up the country.

The new Constitution still left the individual state governments with a wide range of powers. But it made the federal govemment much stronger than before. It gave it the power to collect taxes, to organize armed forces, to make treaties with foreign countries and to control trade of all kinds.

The Constitution made arrangements for the election of a national leader caUed the President to take charge of the federal govemment. He would head the “executive” side of the nation’s government. It would be his job to run the country’s everyday affairs and to sec that people obeyed the laws.

George Washington and the Whiskey Rebellion

In 1788 George Washington was elected as the first President of the United States. New York was then the country’s capital city. On April 30, 1789, Washington stood on a balcony there and swore a solemn oath “to preserve, protect and defend the Constitution of the United States.” When the ceremony came to an end he officially took control of the nation’s government.

Washington believed that poHtical parties were harmful. He said later that it was “the interest and duty of a wise people to discourage” them. Even so, he favored a strong federal government, so he tended to govern in a Federalist manner. The way that he dealt with the “Whiskey Rebellion” of 1794 was an example of this.

The main crop grown by farmers in western Pennsylvania was corn. Some of this they made into whiskey, which they then sold. When the federal government placed a tax on the whiskey the Pennsylvania farmers refused to pay it. They burned down the houses of the federal tax collectors, or “revenue agents,” who tried to make them pay.

Washington sent an army of 15,000 men to support the rights of the federal government. Faced by soldiers, the rebels went home quietly. The Whiskey Rebellion collapsed without any fighting. The soldiers arrested a few of the leaders, but later the President pardoned them.

After this there was no more organized resistance to paying the whiskey tax. But many frontier farmers went on making whiskey that was never taxed. They made it in stills hidden away in the woods, in places that revenue agents could not find. Such illegal “moonshine” whiskey—so called because it was often made at night—continues to be made to this day. 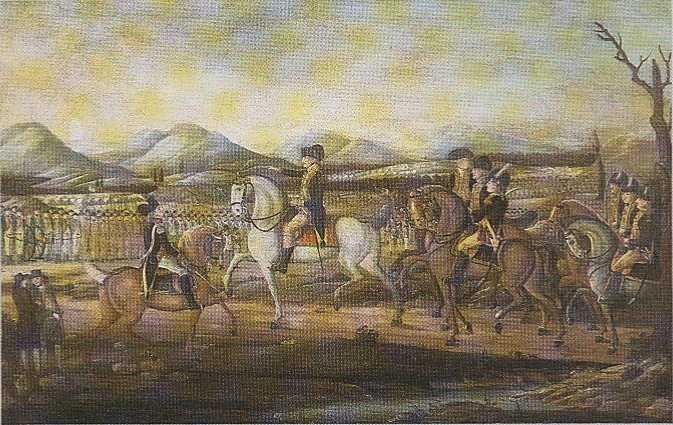 Representatives, however, would depend upon its population.

'I'he Constitution made sure that there was a “balance of power” between these three main parts, or “branches, ” of the federal govermnent. To each branch it gave powers that the other two did not have; each had ways of stopping wrongful actions by either of the other two. This was to make sure that no one person or group could become pow'erful enough to take complete control of the nation's government. The American people had rebelled against being ruled in an undemocratic fashion by Britain. They did not w'ant to replace the unrepresentative rule of the king and parliament in London wdth the rule ofa tyrannical central government in the United States itself

Many Americans had another fear. This w'as that the federal government might try to weaken the power of the states to run their own individual affairs. To remove this danger the Constitution said exactly what powers the federal government should have and what powers should be reserved for the states. It said that the states w'ould be allowed to run their internal affairs as they wished, provided that they kept to the rules of the Constitution.

Before the new system of government set out in the Constitution could begin, it had to be approved by a majority of the citizens in at least nine of the thirteen states. People made speeches and wrote newspaper articles both for and against the Constitution.

Finally, those in favor won the argument. In June 1788, the assembly of the state of New Hampshire voted to accept, or “ratify,” the Constitution. It was the ninth state to do so.

The Constitution went into effect in March 1789.

But it was still not really complete. In 1791 ten amendments, or additions, were made to it.

Together these ten amendments are called the Bill of Rights.

The reason for the Bill of Rights was that the original Constitution had said nothing about the rights and freedoms of individual citizens. The Bill of Rights altered this. It promised all Americans freedom of religion, a free press, free speech, the right to carry arms, the right to a fair trial by jury, and protection against “cruel and unusual punishments.”

In 1801 John Adams, who in 1797 had succeeded George Washington as President of the United States, appointed a new head of the Supreme Court.

The Court’s new' Chiefjusdcc, to give him his official title, w'as John Marshall. Marshall was a 46-year-old lawyer and politician who had fought in the American army during the War of Independence.

Marshall was to be Chiefjusdcc of the Supreme Court for thirty-five years. But he made his most important decision as a judge only two years after he was appointed. In an 1803 legal case known as Marbury v. Mudison, Marshall stated that the Supreme Court has the power to decide whether particular American laws are according to the Constitution.

If the Supreme Court decides that any law is “rcpLignant to the Constitution”-that is, does not agree with it - the Court can declare the law illegal, or “void,” and so prevent it from being enforced.

This power became known as the “power ofjudicial review.” In claiming it, Marshall established firmly the most important basic idea iii American constitutional law. This is, that the Supreme Court is the final authority m deciding the meaning of the Constitution. If its Justices decide that any law' is “unconstitutional,” that law can no longer be enforced.

The Constitution and the Bill of Rights illustrated two different sides of American political life. C)n {he one hand people saw that the country needed a strong and efficient central authority. On the other hand they wanted to protect individual rights and freedoms. Uifferiug ideas about the importance of these issues gave birth to the first political parties in the United States.

Tlie Federalist Party favored a strong President and federal government. For this reason it appealed to richer people, wdio believed that a strong central government would make their property safer. The Democratic Repubhean Party attracted the less wealthy. This was because it supported the rights of the individual states. To people such as small farmers and craftsmen this seemed likely to make it easier for people like themselves to control government actions.