While this attack was in progress, an American civilian, Francis Scott Key, who had been temporarily detained on one of the British ships, watched anxiously through the night. Key had boarded the vessel before the attack in an effort to obtain the release of an American doctor who had been taken into custody in Washington. As twilight faded, Key had seen the Stars and Stripes flying proudly over the battered fort. During the night the glare of rockets and bursting of bombs gave proof that the defenders were holding out. Then, by the first light of the new day, Key saw again the flag, still waving over Fort McHenry. Drawing an old letter from his pocket, he dashed off the words to “The Star Spangled Banner,” which, when set to music, was to become the national anthem of the United States.

To Key that dawn seemed a turning point in the war. He was roughly correct, for in those last weeks of the summer of 1814 the struggle began to move toward resolution. Unable to crack the defenses of Baltimore, the British withdrew to their ships; shortly after, they sailed to Jamaica to join the forces preparing to attack New Orleans.

The destruction of Washington had been a profound shock. Thousands came forward to enlist in the army. The new determination and spirit were strengthened by news from the northern front, where General Sir George Prevost had been leading the main British invasion force south from Montreal. At Plattsburgh, on the western shore of Lake Champlain, his 1,000 Redcoats came up against a well-designed defense line manned by 3,300 Americans under General Alexander 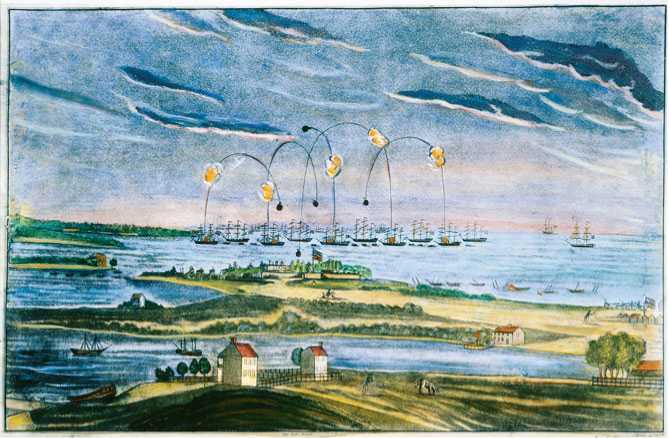 The Bombardment of Fort McHenry by John Bower, with the Stars and Stripes flying over the fort (center). The British fleet fired 1,800 bombs and red-glaring incendiary rockets. The fort did not return fire because the British ships were beyond the range of its cannon. Although "The Star Spangled Banner” celebrates the "home of the brave,” the defenders of Fort McHenry sensibly fled the ramparts and took cover below during the bombardment; they sustained only thirty casualties.


Macomb. Prevost called up his supporting fleet of four ships and a dozen gunboats. An American fleet of roughly similar strength under Captain Thomas Macdonough, a youthful officer who had served with Decatur against the Barbary pirates, came forward to oppose the British. On September 11, in a brutal battle at point-blank range, Macdonough destroyed the British ships and drove off the gunboats. With the Americans now threatening his flank, Prevost lost heart and retreated to Canada.