The apparent loosening of Soviet bloc unity did not go unnoticed in the West. Already in 1961, Zbigniew Brzezinski and William Griffith had called for a policy of "peaceful engagement" with Eastern Europe designed to result "in the creation of a neutral belt of states." In June 1963, John F. Kennedy asked Americans to "reexamine our own attitude toward the possibilities of peace, toward the Soviet Union, toward the course of the cold war."293 A year later, Secretary of State Dean Rusk pointed out that "[t]he Communist world is no longer a single flock of sheep following blindly one leader," and that, in particular, "[t]he smaller countries of Eastern Europe have increasingly asserted their own policies." President Lyndon Johnson harped on the same theme and called for extending bridges of "trade, travel and humanitarian assistance" to Eastern Europe.294 In 1966, however, the momentum toward peaceful engagement and bridge building in the United States collapsed. When Congress defeated the East-West Trade Bill, the Johnson administration’s most ambitious effort to use US economic power as a tool to build bridges to the Soviet bloc ended.295

While the Americans balked, West Europeans rapidly expanded their links to the East. In 1964, Britain signed a fifteen-year credit agreement with the USSR. In 1965, France negotiated a series of trade and technological exchanges; the following year, as de Gaulle visited Moscow, the French dropped many import quotas from Eastern Europe. The Italians, having signed similar agreements, invited Soviet president Nikolai Podgornyi to Rome in early 1967. Indeed, among the large European countries, the Germans were the one exception.

The Harmel Report, adopted by NATO in late 1967, was the logical culmination of the growing Western interest in detente. While maintaining the emphasis on continued military preparedness, the Harmel Report’s major “new" offering was to stress the significance of negotiations with the Warsaw Pact as a means of enhancing European security. This codification of a loosely coordinated dual-track policy - maintaining military strength and pursuing detente - can therefore be seen both as a road map to a different kind of East-West relationship in Europe and as a way of meeting the challenges to NATO’s unity in the 1960s. In a sense, the Harmel Report illustrated the flexible nature of NATO as well as the US leadership role in the alliance. It also served as an opportunity to link French and West German initiatives to a unified approach that the alliance embraced. As Andreas Wenger puts it, the Harmel exercise represented, quite simply, the “multilateralization of detente." Furthermore, in June 1968, at a NATO foreign ministers’ meeting in Reykjavik, the alliance reaffirmed its commitment to detente and declared itself in favor of Mutual Force Reductions talks with the Warsaw Pact.296

Significantly, it appeared that the Eastern bloc was readying itself for detente as well. In addition to unilateral Soviet contacts with a number of West European countries, there were other moves toward detente with the West. In the summer of 1966, the Warsaw Pact issued the so-called Bucharest Declaration, reaffirming its interest in an all-European security conference that had first been broached in 1954. In 1967, a month after Romania’s recognition of the FRG, another Warsaw Pact foreign ministers’ meeting repeated this call. Although these appeals undoubtedly encouraged NATO to move toward the adoption of the Harmel Report, the intended exclusion of the United States and Canada from these Pan-European security talks dampened the enthusiasm of the West. But such sticking points appeared minor when compared to the tensions of the early 1960s. Detente, it seemed, was about to break out.

Not even the August 1968 Warsaw Pact crackdown on Czechoslovakia - discussed in more detail elsewhere in this volume - could change the momentum toward European detente that had been built over the preceding years. Of course, the ruthless intervention that destroyed the internal Czech efforts to build socialism with a human face - the so-called Prague Spring - was a brutal reminder of the limits of internal reform within the Soviet zone. The public justification - the so-called Brezhnev Doctrine - made it clear that any threat to the socialist system was not to be tolerated. As Anatolii Dobrynin, at the time the Soviet ambassador to Washington, recorded in his memoir, the Prague invasion was "a true reflection of the sentiments of those who ran the Soviet Union" at the time, i. e.: "[a] determination never to permit a socialist country to slip back into the orbit of the West."297

Initially it seemed that the crackdown on Czechoslovakia also marked a death blow to detente in its European and Soviet-American varieties. The possibility that a Strategic Arms Limitation Treaty (SALT) - preliminarily outlined at a Soviet-US summit meeting a year earlier - could have been negotiated during the Johnson administration was blocked. West Europeans involved in "bridge building" were naturally taken aback by the invasion as well as Soviet accusations that their detente policy was tantamount to "interference” in the internal affairs of socialist countries. As Chancellor Kurt Kiesinger’s envoy to the United States, Kurt Birrenbach (Christian Democratic Party [CDU] member of Bundestag) told Secretary of State Rusk in September 1968: "Ostpolitik is completely blocked.”298

Ostpolitik in the spotlight

Birrenbach could hardly have been more wrong. Ostpolitik was battered by the events in Prague, but as events during the next few years illustrated, its progress suffered hardly at all. Following the Bundestag elections in the fall of 1969, the Social Democrats formed a new government with Willy Brandt as the chancellor. Subsequently, there was plenty of Annaherung (rapprochement), although to most Germans’ taste, perhaps not enough Wandel (change).299 With Washington’s knowledge - if not always approval - Brandt and his confidant Egon Bahr initiated contacts with the Soviet Union and its East European satellites. They then proceeded to negotiate groundbreaking agreements. The German-Soviet Treaty of August 1970, the September 1971 Four Power agreement on Berlin, and the December 1972 Basic Treaty between East and West Germanies were dramatic examples of the unfolding of Brandt’s Ostpolitik.

While Brandt proceeded from breakthrough to breakthrough, his American counterparts had mixed feelings. Although Nixon and Kissinger were bent on pursuing bilateral detente with the Soviet Union, they were not keen on seeing themselves overshadowed by an independent German policy. More substantively, the Nixon administration wanted to make sure that there were no cracks in a unified Western position that the USSR might exploit. Already during his February 1969 trip through Europe, Nixon warned (the then foreign minister) Brandt that the Soviets’ interest in Ostpolitik was part of "a major Soviet objective to weaken the [NATO] alliance and especially the FRG."300

Brandt had much the same concern. He had no intention of breaking away from NATO, but sought to find ways of aligning Ostpolitik with NATO policy, most specifically with the 1967 Harmel Report. Brandt well understood the need to coordinate his actions with the United States. In discussions in October 1969, Bahr outlined to Kissinger his vision of Ostpolitik, detailing the planned West German overtures toward the USSR, Poland, and East Germany. Writing to Nixon, Kissinger warned that the planned German initiatives "could become troublesome if they engender euphoria, affect Germany’s contribution to NATO and give ammunition to our own detente-minded people here at home. The Germans may also become so engaged in their Eastern policy that their commitment to West European unity may decline. The Soviets, and with some apparent prodding by Moscow, [East German leader Walter] Ulbricht, seem willing enough to receive Bonn’s overtures."301 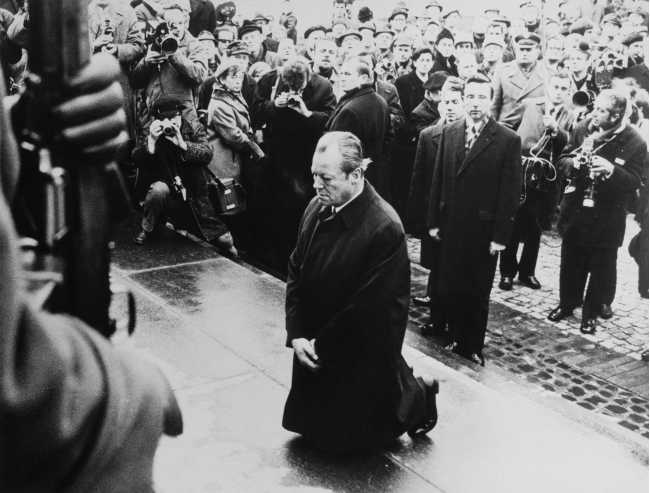 13. West German chancellor Willy Brandt kneehng at the monument to those killed by German troops in the uprising in Warsaw during World War II. Brandt's December 1970 tribute did much to allay Polish anxieties about an ongoing German threat.

Indeed, the Soviets, East Germans, and other Warsaw Pact countries were eager to see Brandt succeed, thus contributing to the success of Ostpolitik in 1970-72. But their motives differed. To Brandt, Ostpolitik was a means to a larger end; a step on the way toward the ultimate unification of Germany. To East Germans, Ostpolitik represented an opportunity for greater legitimacy, for true "statehood."35 For the Soviets and a number of East Europeans, the treaties of 1970-72 meant the consolidation of the division of Germany and the recognition of postwar borders, while increasing access to high-technology items that were still available only in the West. In short, the aims of the leaders were almost diametrically opposite: if Brandt wanted to transform the existing situation, most of his counterparts in the East were hoping to freeze it.

But how much change did Ostpolitik bring about? After all, Germany remained deeply divided, something that most of Germany’s neighbors probably welcomed. In fact, in 1973 both the FRG and the German Democratic Republic (GDR) joined the United Nations, a conspicuous sign that they were, in fact, two separate and independent countries. From this perspective, one might easily argue that the main outcome of Ostpolitik was to give added legitimacy to the GDR at the expense of the reunification hopes of the FRG. Certainly, the policymakers of 1973 did not think that they had set in motion an irreversible process that would result in the reunification of Germany less than two decades later.

Since officials could not foresee the future, the debates regarding the longterm significance of detente are frustrating: they go around in circles. How does one interpret the changes that took place? Were they radical or conservative, transformative or stabilizing? Did detente accelerate or prolong the collapse of the Cold War order in Europe (whether the collapse was inevitable is quite another matter)? It is impossible to answer any of these questions with certainty. We know that the Cold War ended after detente, so it is, of course, tempting to maintain that the simple sequence of events proves a causal link. But we cannot 'prove’ that such a link necessarily exists. In terms of Ostpolitik and German reunification, such links are (as they were at the time) intimately tied to domestic politicking, which, in turn, is not the best possible stimulus for objective historical assessment.

Nevertheless, one can surely assert that by opening doors and building bridges, Ostpolitik made the eventual peaceful unification of Germany easier (even if not inevitable). But its impact - as well as its origins - went far beyond the narrow boundaries of German-German relations. By improving relations with a number of East European governments as well as the Soviet Union, Brandt and his Ostpolitik set in motion the process of increased exchanges and contacts across the Iron Curtain that paved the way to the successful conclusion of the Conference on Security and Cooperation in Europe, a key event in the era of detente.