The 1937 anti-theft law was draconian, but there are ways for society to modify overzealous laws. Crimes must be reported, but the managers and administrators, the ones most likely to witness thefts, may not want to lose workers to prison for trivial offenses. Sentences had to be issued by local prosecutors and judges who might know the defendants or their relatives and friends. They could look for mitigating circumstances; they could try to find excuses.

Stalin's criminal justice system combated such local pressures for leniency by making the mandatory sentences unequivocal, by monitoring judges and prosecutors (even punishing soft justice officials), and by making non-reporting a crime in itself.

The justice ministry was responsible for the conduct of its judges. The primary message of j ustice ministry reports was that the citizenry could rest easy because the justice ministry was vigilant: "The Ministry of Justice is undertaking all necessary measures to eliminate defects in the work of judges in applying the Decree of June 4, 1947.” Its regular reports brag to Stalin about the forceful "battle against theft.”

Such pride was justified. A remarkable half million people were prosecuted in the remaining seven months of 1947 after the June law was enacted. Thereafter, justice ministry reports heralded "successes” as evidenced by the declining but still high number of convictions for theft, which stood at a quarter million convictions in both 1948 and 1949. Despite these achievements, the record was not perfect. Justice ministry statistics show that, of those sentenced under the June 4, 1947, decree, six percent received less than five years and some even received suspended sentences—evoking the following complaint about local judges and prosecutors from the justice ministry:

In the practice of applying the [June 4, 1947] Decree, judges make a large number of mistakes and distortions that weaken the struggle against the theft of state and socialist property: There are unsubstantiated sentences by judges, unfounded deviations from penalties called for by the Decree, the unfounded usage of conditional sentences, and also foot-dragging in investigations. In addition, the prosecutor and police, in many cases, do 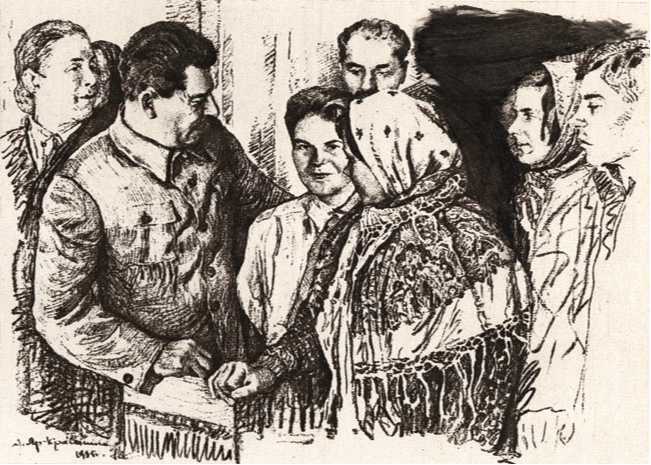 Poster of Stalin with a happy group of collective farmers (many of whom were punished for petty thefts from the fields under his anti-theft campaigns).

Not "arrest" the property of the accused, giving the thief an opportunity to conceal the stolen property.2

Judges could be too lenient, but they could also make mistakes: "Investigatory agencies often bring unfounded indictments for criminal acts, which mean that citizens are unfairly prosecuted and sentenced." Thus, the tough judge could be accused of convicting innocent citizens, and the lenient judge accused of deviating from the punishments set by the Great Stalin himself.