Juan Peron was the first Argentinian leader to make the will of the people a principle of government. He made a direct personal identification with the people, an approach which stood in marked contrast to the disregard shown towards the masses by leaders previously. This did not make Peron a democrat; he did not regard popular support as indispensable to his authority. But in his judgement, it did elevate his leadership to a higher plane than the merely political. He was not simply a leader of Peronism, the movement which took his name; he was the movement. Early in his first presidency he attempted to give the movement a philosophical base by making it synonymous with justicialismo, a system for providing justice for the people. It was said to rest on three fundamental principles:

Insofar as there is a definitive statement of Peronism as a political theory, it was contained in what Peron described as the 'the Twenty Truths', a list drawn up before he came into office in 1946 (see Source D).

What is notable about the Twenty Truths is that they are a set of assertions, not a developed philosophy. Neither do they form an economic programme. This is why Peronism in action often had a pragmatic quality to it. In practice, it became a mechanism for staying in power. This did not prevent the supporters of Peronism, the term being used interchangeably with justicialismo in the Twenty Truths, from ascribing high ideals to it. Ironically, Peronism was at its most appealing as an ideology during the two decades between 1955 and 1973 when Peron was in exile, the reason being that his followers could invest in it their own aspirations and intentions. This over the years led to splits in the movement, the main division being between the far Left and the nationalist Right, both wings believing that ultimately the party could be shaped to its own particular design.

There is a fascinating sense in which Peronism, the movement that bore Peron's name, was a greater force than he was. This was because those who called themselves Peronists imparted to the term their own expectations and beliefs rather than slavishly embracing Peron's ideas.

According to Source D, what social values do Peronism and justicialism represent?

1.  True democracy is when the government defends only one interest: that of the people.

2.  Peronism represents the will of the people.

3. The individual Peronist works for the Peronist Movement.

4. For Peronism there is only one class: those who work.

5. In the New Argentina work is both a right and a duty. Justice requires that no one should consume more than he produces.

6.  For the Peronist there is nothing better than another Peronist.

8. In political action, the Peronist accepts the following order of values: first the Fatherland, then the movement and then the men.

9. Politics for us is a means not an end. The end is the good of the Fatherland, which means the happiness of its children and national greatness.

10. The two arms of Peronism are Social Justice and Social Welfare. These embrace the people with justice and love.

11.  Peronism seeks national unity not strife. It needs heroes but not martyrs.

12.  In the New Argentina the only privileged ones are the children.

13.  A government without doctrine is a body without soul. For this reason Peronism has a political, economic, and social doctrine: Justicialism.

16.  As an economic doctrine, Justicialism puts capital to the service of the economy, which in turn serves the well being of society.

17.  As a social doctrine, Justicialism seeks social justice, which is the guarantee of the people's rights.

19. Peronism constitutes a central government, an organized state and a free people.

20. Argentina's greatest asset is its people. 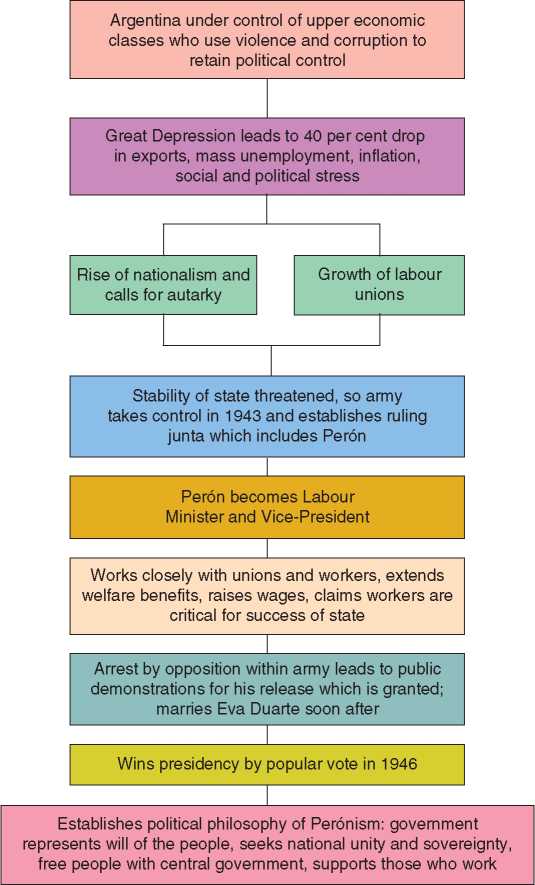