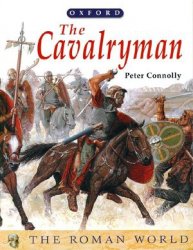 The Cavalryman (The Roman World Series)
Author: Peter Connolly
Oxford Publishing Press
ISBN: 0199104247
2003
Pages: 34
Format: PDF
Size: 6.14МБ
Language: English
Tiberius Claudius Maximus served under the emperor Trajan in the great wars in Central Europe and the Middle East. He was decorated three times for bravery and became famous for hunting down Rome's great enemy, Decebalus. This volume and its prequel The Legionary trace Maximus's career from the day he entered the Seventh Legion on the Danube frontier to the day he retired as a cavalry officer in Mesopotamia some 30 years later. Connolly calls on a vast array of archaeological material to provide a unique portrait of the life of an ordinary man who lived during an extraordinary period in Western history.