Judea Trembles Under Rome: The Untold Details of the Greek and Roman Military Domination of Ancient Palestine During the Time of Jesus of Galilee 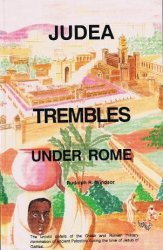 A provocative and historical blueprint of the times and conditions that gave rise to the Greek and Roman conquest of ancient Palestine. Windsor gives detailed information of how the ancient Judeans had to puffer under the Greek and Roman oppression. In clear lucid prose, the author outlines the development of the Essenic sect and customs, depicting how Christianity developed from the Essenes. Professor Windsor utilizes various ancient sources such as: the Dead Sea Scrolls, biblical texts, Josephus' works, and many other scholarly sources.
His research encountered startling information dealing with many rebel leaders against Rome who called themselves messiahs and prophets. He addresses the questions. Who was the real Jesus? What was his mission?