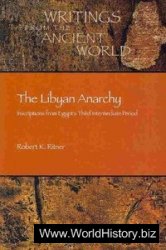 Author: Robert Kriech Ritner
The Libyan Anarchy: Inscriptions from Egypt's Third Intermediate Period
Society of Biblical Literature Atlanta
2009
ISBN: 1589831748
Language: English
Pages: 642
Format: PDF
Size: 14,52 МБ
Contemporary with the Israelite kingdom of Solomon and David, the Nubian conqueror Piye (Piankhy), and the Assyrian Assurbanipal, Egypt s Third Intermediate Period is of critical interest not only to Egyptologists but also to biblical historians, Africanists, and Assyriologists. Spanning six centuries and as many dynasties, the turbulent era extended from approximately 1100 to 650 B.C.E. This volume, the first extensive collection of Third Intermediate Period inscriptions in any language, includes the primary sources for the history, society, and religion of Egypt during this complicated period, when Egypt was ruled by Libyan and Nubian dynasties and had occasional relations with Judah and the encroaching, and finally invading, Assyrian Empire. It includes the most significant texts of all genres, newly translated and revised. This volume will serve as a source book and companion for the most thorough study of the history of the period, Kitchen s The Third Intermediate Period in Egypt.