Historical Dictionary of the Berbers 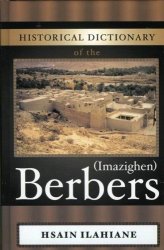 The Phoenician colonies in North Africa started out as peaceful, trading presence among the Amazigh original inhabitants of the region. These colonies, though initially inhabited by Phoenicians from the eastern Mediterranean, became a mix of the two peoples as they intermarried with the local Amazigh. The Amazigh, as well as the Punic Phoenicians, who survived the Roman subjugation of the region are credited with preserving the Phoenician language up till the time of Saint Augustine in the 5th century. Further, traces of the Phoenician alphabet are evident in the Tamazight (Berber) alphabet called Tifinagh...

The presence of the Berber in North Africa today is a living proof that the "Arab World" is not made up of 325 million Arabs. In fact, pan-Arabism is an unfounded heresy forced down the throats of people conquered and subjugated beginning with the advent of the Arab conquest in the 7th century. The Amazigh, much like the overwhelming majority of the people of this (Arab) "world," belong to a wide variety of ethnic groups that are different in blood, tradition, language, literature, art and history, and should not be lumped together as a single people.