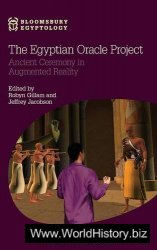 For more than 2,000 years, between 1500 BCE and 600 CE, the Egyptian processional oracle was one of the main points of contact between temple-based religion and the general population. In a public ceremony, a god would indicate its will or answer questions through the movements of a portable cult statue borne by priests or important members of the community.
The Egyptian Oracle Project is an interactive performance that adapts this ceremony to serve as the basis for a mixed-reality educational experience for children and young adults, using both virtual reality and live performance. The scene is set in a virtual Egyptian temple projected onto a wall. An oracle led by a high priest avatar (controlled by a live human puppeteer) is brought into the presence of a live audience, who act in the role of the Egyptian populace. Through the mediation of an actress, the audience interacts with the avatar, recreating the event.
The series of carefully focused essays in this book provides vital background to this path-breaking project in three sections. After a brief introduction to educational theatre and virtual reality, the first section describes the ancient ceremony and its development, along with cross-cultural connections. Then the development of the script and its performance in the context of mixed-reality and educational theatre are examined. The final set of essays describes the virtual temple setting in more detail and explores the wider implications of this project for virtual heritage. 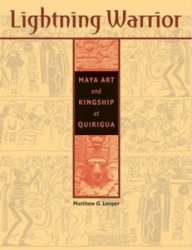 The ancient Maya city of Quirigua occupied a crossroads between Copan in the southeastern Maya highlands and the major centers of the Peten heartland. Though always a relatively small city, Quirigua stands out because of its public monuments, which were some of the greatest achievements of Classic Maya civilization. Impressive not only for their colossal size, high sculptural quality, and eloquent hieroglyphic texts, the sculptures of Quirigua are also one of the few complete, in situ series of Maya monuments anywhere, which makes them a crucial source of information about ancient Maya spirituality and political practice within a specific historical context.
Using epigraphic, iconographic, and stylistic analyses, this study explores the integrated political-religious meanings of Quirigua's monumental sculptures during the eighth-century A.D. reign of the city's most famous ruler, K'ak' Tiliw. In particular, Matthew Looper focuses on the role of stelae and other sculpture in representing the persona of the ruler not only as a political authority but also as a manifestation of various supernatural entities with whom he was associated through ritual performance. By tracing this sculptural program from its Early Classic beginnings through the reigns of K'ak' Tiliw and his successors, and also by linking it to practices at Copan, Looper offers important new insights into the politico-religious history of Quirigua and its ties to other Classic Maya centers, the role of kingship in Maya society, and the development of Maya art. 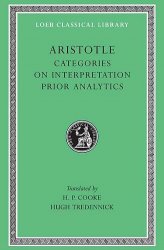 Previous Next
Back to top