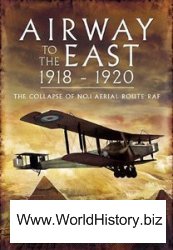 Author: Clive Semple
Airway to the East 1918-1920
Pen and Sword
ISBN: 1848846576
2012
Format: EPUB
Size: 4,7 МБ
Language: English
Pages: 256
The origins of what became officially known as No 1 Aerial Route lay in the newly formed Royal Air Force's desire to move several squadrons of the then recently designed first heavy bomber to enter service - the Handley Page O/400, to the war in the Middle-East. The aircraft had served on the Western Front with some success, although not in the long-range capacity. During the spring of 1918, the Wing Commander of No 5 Wing, 'Billy' Borton, requested that one of the HP O/400 aircraft be flown to Egypt. This was approved by Major General Sir Frederick Sykes. Before the flight could proceed a great deal of planning was required since the aircraft's maximum range was only 600 miles. Several refueling and maintenance bases along the route were required. When planned in 1918 the route was from Paris - Lyons, Istres, Pisa, Rome, Barletta, Taranto, Athens, Crete, Mersa Matru and finally Cairo. Each landing station would require fuel, spares, and communications and back-up personnel. On July 50.00 1918 a new HPO/400 set off from Manston in Kent with Borton and his pilot Major McLaren plus two crew. After a comparatively trouble-free flight the bomber arrived in Aboukir, Alexandria on the evening of 7 August. As a result, the RAF decided to use this route to fly several squadrons of the Handley Page bombers shortly after the war had ended. The Arab leaders had found out that the Allie's promise that the captured Turkish lands would be returned to them was a duplicitous lie and that France and Great Britain would take control of the area. This quite naturally lead to massive unrest and rioting throughout the middle-eastern lands. The bombers were needed to quell the rioting and sabotage that had broken out. Thus, on 3 May 1919 58 Squadron set of from France on No 1 Aerial Route. It was a premature departure since many of the refueling airfields along the route were not prepared for there incoming customers. Chaos ensued - by 1 November Three Squadrons had been dispatched. Of the 51 bombers sent only 26 had arrived, ten were stuck en-route and 15 had been written-off as broken or lost at sea and 11 aircrew had perished.This is the story of the development of the route. It would eventually form the first stage of the Imperial Air Route to Australia.