Armoured Horseman: With the Bays and Eighth Army in North Africa and Italy 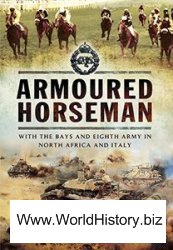 Author: Peter Willett
Armoured Horseman: With the Bays and Eighth Army in North Africa and Italy
Pen & Sword Military
ISBN: 147383421X
2015
Format: EPUB + PDF (conv)
Size: 4,3 МБ + 9,7 МБ
Language: English
Pages: 192
New memoirs by combatants in the Second World War are sadly rare today due to the passage of time. Tanks and Thoroughbreds will be warmly welcomed as the author, now into his 90s, fought through with The Bays from Alamein to Tunis and then on up Italy until VE Day. As a young tank troop commander his chances of survival were slim and tragically many of his friends were killed.
Peter Willett, a professional journalist and much published author, is superbly qualified to describe his war and the experiences of his fellow cavalrymen. He tells a moving story with characteristic lightness of touch and modesty.
As well as satisfying the military enthusiast Tanks and Thoroughbreds will find a ready audience in the racing fraternity. Peter describes equestrian activities in postwar Austria and goes on to summarize his career as a racing journalist, authority on breeding, membership of the Jockey Club and long association with Goodwood.