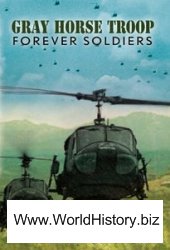 Author: Charles Baker
Gray Horse Troop: Forever Soldiers
Powder River Publications
ISBN: 0988811103
2013
Format: EPUB
Size: 10,2 МБ
Language: English
Pages: 376
This searing memoir of the war in Vietnam, and again in Iraq, captures the emotions, fears, and concerns of young men facing life or death in far away lands. Gray Horse Troop is a testament to the gallantry of the men of the 5th Battalion 7th U.S. Cavalry - from Montana in the 1870s to the Middle East in 2005. The author narrates the story about the soldiers, honoring the men who served in this storied unit. From his perspective as the Battalion Operations Officer, he gives a first hand account of combat as part of the legendary 1st Cavalry Division in Vietnam in the first half of 1968. 5/7th Cav fights its way into Hue during Tet of 1968, clears the NVA away from the perimeter at Khe Sahn, and pursues the enemy into the infamous A Shau Valley. He provides the big picture that surviving veterans did not get while fighting for survival down at squad level. Gray Horse Troop is a personal account of what the author saw, remembered, and further researched; which he writes about with traces of wit, political incorrectness, and cynicism. Being embedded with 5/7th Cav in Iraq in 2005 provides the framework for recalling the various Vietnam battles. He is blunt about the human costs of war. He writes in simple language, directed beyond the military reader to all who are interested in the Cold War Era.