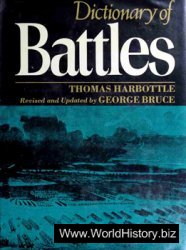 Harbottle's "Dictionary of Battles" is one of the handiest reference books ever written for anyone who needs to know a little bit about a whole lot of military history, such as the story of the Battle of Puebla which spawned the Cinco de Mayo celebrations in the United States and Mexico, or the role of the French fleet at the Battle of Yorktown. The Dictionary of Battles is an invaluable reference work. Originally compiled by Thomas Benfield Harbottle around the turn of the century, it has now been updated by George Bruce to include all twentieth-century military operations from the Boer Wars through Vietnam. For comprehensiveness, the Dictionary of Battles also includes the sieges, raids, and relatively minor actions of important wars, because these tactical moves very often led to the main battles.