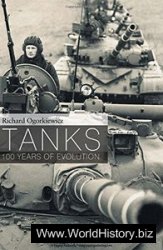 Author: Richard Ogorkiewicz
Tanks: 100 Years of Evolution (General Military)
Osprey Publishing
ISBN: 1472806700
2015
Format: PDF (Converted)
Size: 11,5 МБ
Language: English
Pages: 320
Tank presents a comprehensive account of the world-wide evolution of armoured vehicles from their inception a century ago to the present day, starting with a detailed reappraisal of the development of tanks and how they evolved during World War I. By the end of that conflict tanks had gained considerable importance. However, this was not sustained in its immediate aftermath and a revival only began when the British Army started in to experiment in the 1920s with a more mobile use of tanks. The subsequent rise of the importance of armoured vehicles was accompanied by and was partly due to the advances in their design and performance achieved in Europe and America before World War II. The enhanced capabilities that tanks consequently acquired enabled them to become the core of combined-arms, mechanized formations.
Professor Ogorkiewicz has worked in the field of armoured vehicle development since the 1970s, and this is a serious, analytical study on the history of tank development and armoured warfare.