The Lost Squadron: A True Story 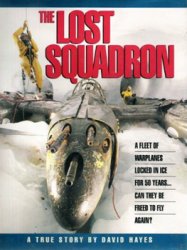 In July 1942 a squadron of brand-new American warplanes desperately needed by the Allied war effort was flying to England via Greenland and Iceland. Caught in a blinding blizzard and running short of fuel, the two B-17 bombers and six P-38 Lightnings crashlanded on Greenland's vast glaciers. The crews were evacuated safely, but the aircraft had to be left behind. Nearly forty years later, Pat Epps and Richard Taylor, two Atlanta-based aviation enthusiasts, learned of the lost squadron during a stopover in Greenland after a flight across the North Pole in 1981. In the years since the crash, Greenland's winters had dumped tons of snow on the abandoned aircraft, but using magnetometers and a sophisticated radar system designed to probe beneath deep ice, Epps and Taylor located the planes - lying 260 feet below the surface and resolved to dig them out. They finally succeeded in 1993. "The Lost Squadron" celebrates the spirit of adventure and the perseverance of the members of the Greenland Expedition as, equipped with little more than enthusiasm and dogged determination, they bring one of the P-38s of the lost squadron home to fly the skies once again.