Armoured Warfare in the Korean War (Images of War) 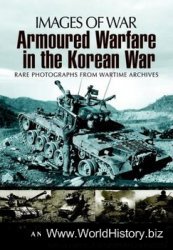 After the Second World War, military analysts thought that the only place significant armored forces were ever likely to confront each other again was in central Europe where the Nato alliance would fend off the Soviet Red Army. Then during the Korean War of 1950-53 both sides deployed large numbers of armored fighting vehicles, and this neglected aspect of the conflict is the subject of Anthony Tucker-Jones's photographic history. Korea, with its rugged mountains, narrow passes, steep valleys and waterlogged fields was not ideal tank country so the armor mainly supported the infantry and rarely engaged in battles of maneuver. Yet the wide variety of armor supporting UN and North Korean forces played a vital if unorthodox role in the swiftly moving campaigns.