Sunk by the Bismarck: The Life and Death of the Battleship HMS Hood 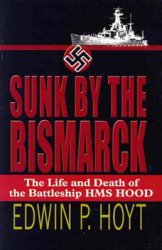 When she was completed in the spring of 1920 HMS Hood was the greatest warship afloat. She was the largest the fastest and the finest. Every sailor in the world knew the name Hood and marveled at her strength and size. For twenty years the HMS Hood was the world's mightiest warship. When World War II broke out she was stationed at Scapa Flow in Northern Scotland shepherding convoys and guarding against attack by Hitler's heavy surface fleet. Then in May 1941 3 the Bismarck sailed into the Atlantic. This is the saga of how the Hood served and fought and the dramatic story of how she finally died sunk by the new Nazi super-battleships Bismarck destined to become a legend of its own.