War in the Air: True Accounts of the 20th Century's Most Dramatic Air Battles 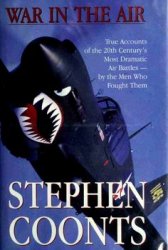 Stephen Coonts, America's foremost writer of aviation, now presents twenty-six dramatic true accounts of aerial combat from World War I to Vietnam. Never before has such a collection been drawn from such a wide range of sources — American, British, German, Japanese, and more. Experience firsthand combat from the wood-and-fabric biplanes to the most technologically advanced fighting machines. These are not stories of the planes, however, but of those that fly them and the steady hands, bold hearts and raw nerve it takes to survive in an aerial battlefield. This is an epic of tragedy and courage, and a powerful tribute to this century's aerial warriors.