Wars of the 20th Century 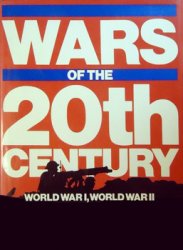 The turn of the century was a watershed in world history. Victoria still reigned in Britain; Kaiser Wilhelni II was calling for a 'place in the sun' for Imperial Germany; Czar Nicholas II was at the start of his ill-fated reign in Imperial Russia. Austria-Hungary, the Hapsburg Empire, dominated parts of Central and Eastern Europe along the Danube as she had done for centuries; the Ottoman Empire, with its Sultan in Constantinople, claimed suzerainty over most of what is now called the Middle East and even part of the Balkans. Africa and Asia were ruled by a few Western European states, notably Britain and France. The sleeping giant, the United States, had just entered the imperial race in the Spanish-American War, and was beginning its expansion in the Caribbean and Latin America. There were none who questioned European hegemony over the world. Europe, in fact, was the center of the world. It was only a matter of which power or combination of powers would dominate the other....