Tank Warfare: A History of Tanks in Battle 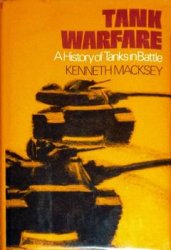 After its introduction during the First World War, the tank revolutionized warfare and proved to be a terrifying and efficient machine of war. Kenneth Macksey provides a study of the policy-makers and tank strategists, the technical and tactical development, as well as presenting the story of the tank on the battlefield—the split-second decisions, the battle-weary crews, and the endless mud in this fascinating and detailed account of tank warfare. Tank Warfare delves into the history of the tank, its formation and early prototypes, as well as how it came to be the master of the land battle, becoming Hitler’s driving force for Blitzkrieg and changing the course of the battle of El Alamein.