The Middlebrook Guide to the Somme Battlefields 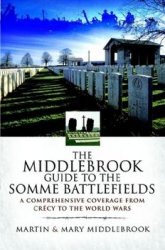 While best known as being the scene of the most terrible carnage in the WW1 the French department of the Somme has seen many other battles from Roman times to 1944. William the Conqueror launched his invasion from there; the French and English fought at Crecy in 1346; Henry V's army marched through on their way to Agincourt in 1415; the Prussians came in 1870. The Great War saw three great battles and approximately half of the 400,000 who died on the Somme were British - a terrible harvest, marked by 242 British cemeteries and over 50,000 lie in unmarked graves. These statistics explain in part why the area is visited year-on-year by ever increasing numbers of British and Commonwealth citizens.