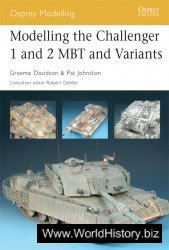 Introduced to the British Army in 1983, Challenger Main Battle Tanks have served operationally in the Balkans and both Gulf Wars, where their firepower, protection and shock action were instrumental to the success of British forces. In addition to the familiar gun tanks, the Challenger family encompasses the Rhino Armoured Repair and Recovery Vehicle (ARRV), highly modified Desert Challenger 2s operated by the Royal Army of Oman and the radical Falcon 2 being developed by the Jordanian Army. This book covers a wide range of these variants, with each chapter presenting a different build using colour photos to illustrate scratch-building, painting and weathering techniques across a variety of skill levels.