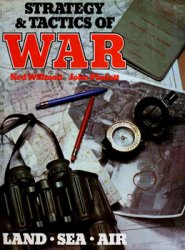 In The Strategy and Tactics of War Ned Willmott and John Pimlott explore the art of war historically, and with particular reference to its development in the twentieth century. The book breaks down into three main areas: land, sea and air, and within each one, the development of strategy and the implementation of tactics is detailed. Such problems as how dependence on the lessons learned (belatedly) from the trench warfare of World War I blinkered Allied response to the German tank blitzkrieg of 1940; the grim lessons only now being really understood from the failure of strategic air bombing of civilian and commercial targets ; the initial success of the German naval blockade of Britain and how the convoy system overcame the U-boat threat - all these, and many more, are discussed in this engrossing book. The Strategy and Tactics of War provides an absorbing glimpse into the living military history of our time.