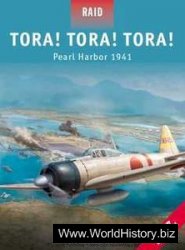 The Japanese assault on Pearl Harbor is one of the most famous raids in history, if not the most famous. In the early hours of December 7, 1941, the carriers and aircraft of the Japanese First Air Fleet launched a sudden and unexpected attack on the US naval forces anchored in Pearl Harbor, hoping to cripple America's naval capabilities in one decisive blow. This new study by Mark Stille will address the build-up to, execution of, and fallout from the Pearl Harbor operation. Putting the raid in context, the political and military background will be addressed - Japanese expansion in the Far East, and American responses to it, and the steady increase in tensions between the two powers. The Japanese decision to launch an assault on Pearl Harbor will be considered in detail, from the time constraints faced in planning the raid, alternative operational possibilities, and the bold, stubborn leadership of Admiral Isoruku Yamamoto, who was the driving force behind the concept and planning, to the final adoption of the operation, and its place in Japan's national strategy. It is an illuminating new look at one of the most infamous events in modern history.