The Geeks of War: The Secretive Labs and Brilliant Minds Behind Tomorrow's Warfare Technologies 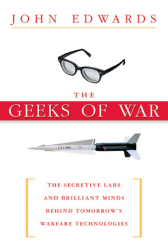 "Wars are fought on the battlefield, but the technologies that enable 21st century warfare are developed in research laboratories. Within the walls of corporate, government, and academic labs, researchers are probing the edges of science to uncover technologies that will make warfare more efficient - and more deadly. This book looks at the people behind the curtain, and at the next generation of tactical, information, communication, vehicular, biological, and cryptographic systems. Featuring in-depth interviews with the project directors and scientists performing this groundbreaking research, "The Geeks of War" also examines their scientific, political, patriotic, and financial motives, as well as the implications these technologies may have for the future. Presenting the views of numerous respected military, business, and technology analysts, "The Geeks of War" takes readers inside America's leading military technology research facilities - exploring a clandestine world that few people ever see."