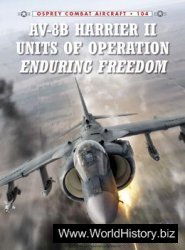 In the 1970s the USMC bought the AV-8A Harrier from the UK whose VTOL capabilities allowed it to serve as a tactical aircraft that could deploy with Marine forces on amphibious assault ships and provide air cover and close air support from large deck aircraft carriers. Third in a trilogy on US Marine Corps Harrier IIs in combat, it will be the first volume to cover the whole story of the AV-8B's service employment during peacekeeping operations and then in Afghanistan.