The Illustrated History of the Submarine 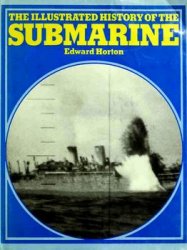 Seventy years ago Admiral A. K. Wilson of the Royal Navy issued his ringing denunciation of the submarine. It was, he thundered, 'underhand, unfair, and damned unEnglish'. Of course 'Tug' Wilson was only repeating the time-honoured hypocrisy reserved for new weapons by those who are proficient with the old. It was hardly to be expected that the mightiest navy the world had ever seen would take kindly to a newfangled device that threatened the very existence of capital ships. Yet in a curious way his comment was prophetic. Leaving aside the moral question, the submarine was about the most 'unEnglish' weapon ever devised, in that England was uniquely vulnerable to it. In both world wars she was brought to the very brink of defeat by German U-boats, and by U-boats alone.