Swift to Battle: No.72 Fighter Squadron RAF in Action 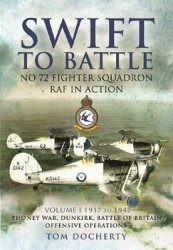 This first of three volumes traces the history of 72 Fighter Squadron, one of the premier squadrons in the Royal Air Force. The aircraft flown, operational personnel and missions flown are fully described with firsthand accounts from pilots and both air and ground crew.