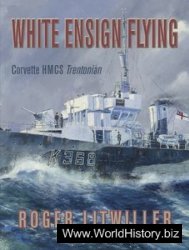 White Ensign Flying tells the story of HMCS Trentonian, a Canadian corvette that fought U-Boats in the Second World War. Trentonian escorted convoys on the North Atlantic and through the deadly waters near England and France. The ship was attacked by the Americans in a friendly-fire incident during Operation Neptune and later earned the dubious distinction of being the last corvette sunk by the enemy. Litwiller has interviewed many of the men who served in Trentonian and collected their stories. Their unique personal perspectives are combined with the official record of the ship, giving an intimate insight into the life of a sailor — from the tedium of daily life in a ship at sea to the terror of fighting for your life in a sinking ship. Over one hundred photos from the private collections of the crew and military archives bring the story of Trentonian to life, illustrating this testament to the ship and the men who served in it.