The Illustrated History of Helicopters 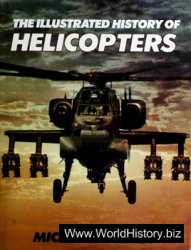 Helicopters are such a familiar part of modern life that it is easy to forget how rapid has been their spread and development. Although the idea of the helicopter can certainly be traced back to Leonardo da Vinci, it was not until the 1930s that the first practical examples were built. At the start of World War II the helicopter speed record was some 70 mph and the distance record was a mere 143 miles. Today's military attack helicopters can attain 200 mph while civil and military machines can lift payloads up to 50,000 pounds or have operational specialties ranging from supplying offshore oil rigs in some of the most testing weather conditions to low altitude 'nap of the earth' flying in sophisticated combat role