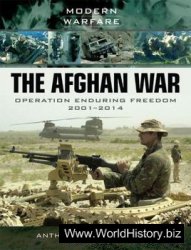 Drugs, war and terrorism were the unholy trinity that brought the US-led air campaign crashing down on the Taliban regime in Afghanistan in October 2001 in Operation Enduring Freedom, and this photographic history is a graphic introduction to it. The immediate aim was to eject the Taliban from power, and to capture or kill the al-Qaeda leader Osama bin Laden and his supporters whom the Taliban were sheltering. The decade-long war that followed, first against the Taliban regime, then against Taliban insurgents, is one of the most controversial conflicts of recent times.