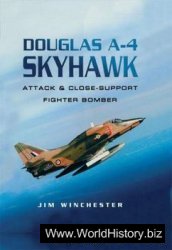 The Skyhawk first entered service with the US Navy almost 50 years ago. It first flew 22 June 1954 and is still in service with various US units and remains the backbone of many of the air forces of those countries to which it has been exported. It was originally conceived as a carrier-borne fighter bomber, but as the aircraft has evolved it has taken on other roles. It is renowned for its strength and survivability in combat.