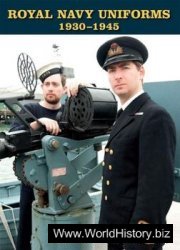 Royal Navy Uniforms 1930-1945 uses over 400 illustrations - both period images and new colour photographs of original items - to show the clothing of both Officers and Ratings in World War II and during the years leading up to it, when Naval uniforms underwent significant modernization. The illustrations are supported by detailed text describing the development and use of Naval clothing of the time. Its contents include Officers' clothing and effects; Class 1 and III Ratings' clothing and effects; seamens' clothing and effects; battledress and tropical clothing; miscellaneous clothing, personal effects and substantive and non-substantive insignia. This is the first book to offer a detailed study of Royal Navy clothing in the 1930s and World War II and will be a vital resource for collectors, historians and enthusiasts. All of the major uniform types are superbly illustrated with 470 colour and black & white studio images and period photographs.