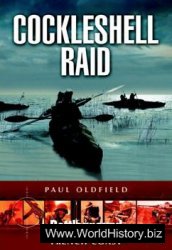 Operation 'Frankton' is a story of how a handful of determined and resourceful men, using flimsy canoes, achieved what thousands could not by conventional means. The volunteers had enlisted for 'Hostilities Only' and, except for their leader, none had been in a canoe before. However, with a few months training they carried out what one German officer described as, "the outstanding commando raid of the war". They became known as the 'Cockleshell Heroes', having been immortalized in a film and a book of that name in the 1950s.