Pegasus: The Heart of the Harrier 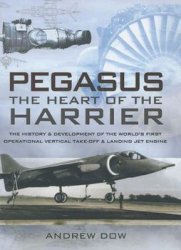 The conception of the Pegasus engine in 1957 upset all the conventions of aircraft design. It was previously usual for aircraft designers to seek a suitable engine, but this was an engine that sought an aircraft. The aircraft that resulted was the famous Harrier that is still in front-line service with air forces around the world including the RAF and US Marine Corps. This book takes an in-depth look at the engine's original design concept, initial production and flight testing. It then goes on to explain how the developments and improvements have been made over the ensuing years and includes experiences of operational combat flying, both from land and sea.