Warspite: Warships of the Royal Navy 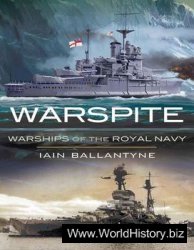 No warship name in British naval history has more battle honours than Warspite. While this book looks at the lives of all eight vessels to bear the name (between 1596 and the 1990s), it concentrates on the truly epic story of the seventh vessel, a super-dreadnought battleship, conceived as the ultimate answer to German naval power, during the arms race that helped cause WW1. Warspite fought off the entire German fleet at Jutland, survived a mutiny between the wars and then covered herself in glory in action from the Arctic to the Indian Ocean during WW2.