Concord 1012 - British Army Of The Rhine 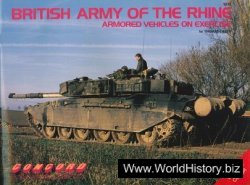 Author: Thomas Laber
Concord 1012 - British Army Of The Rhine
Concord Publications
ISBN: 9623610122
1992
Format: PDF
Size: 61,8 МБ
Language: English
Pages: 64
For more than 40 years, the British Forces in Europe has contributed as part of Britain's commitment to the collective defence system of the North Atlantic Treaty Organisation (NATO). By having an army of more than 71,000 men permanently stationed on the European continent, the United Kingdom shares with its NATO partners, particularly with Germany, the Netherlands and Belgium, the responsibility for the maintenance of peace, freedom and security in the heartland of NATO's Central Front.
The present structure of the British Forces in Europe, especially in Germany, dates back to the the Second World War when British army and air force units participated in the Normandy invasion (in 1944) alongside their allies. At the end of the war, the British contingent remained in North West Germany as the British Army of the Rhine (BAOR) and the Royal Air Force Germany (RAFG). Further troops were stationed in Berlin.
Due to the subject of this book, the following chapters will mainly describe the organisation and responsibility of the BAOR representing the major component of the British Forces in Europe with over 56,000 military personnel.