Revolution from Abroad: The Soviet Conquest of Poland's Western Ukraine and Western Belorussia 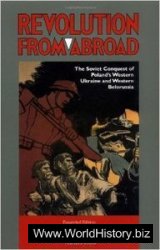 Author: Jan T. Gross
Revolution from Abroad: The Soviet Conquest of Poland's Western Ukraine and Western Belorussia
Princeton University Press
ISBN: 0691096031
2002
Format: DJVU
Size: 25,5 МБ
Language: English
Pages: 408
Jan Gross describes the terrors of the Soviet occupation of the lands that made up eastern Poland between the two world wars: the Western Ukraine and Western Belorussia. His lucid analysis of the revolution that came to Poland from abroad is based on hundreds of first-hand accounts of the hardship, suffering, and social chaos that accompanied the Sovietization of this poorest section of a poverty-stricken country. Woven into the author's exploration of events from the Soviet's German-supported aggression against Poland in September of 1939 to Germany's attack on the Soviet Union in June 1941, these testimonies not only illuminate his conclusions about the nature of totalitarianism but also make a powerful statement of their own. Those who endured the imposition of Soviet rule and mass deportations to forced resettlement, labor camps, and prisons of the Soviet Union are here allowed to speak for themselves, and they do so with grim effectiveness.