Ragged War - The Story of Unconventional and Counter-Revolutionary Warfare 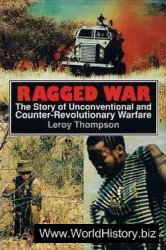 Guerrilla warfare may well be seen as a 20th century development, although its origins go back to the dawn of warfare. It is probable that insurgency & counter-terrorist actions by superpowers & lesser nations will become the most likely use of military power in the coming decades. This study is an historical examination of the development of counter-insurgency & counter-terrorist warfare. As well as an assessment of the tactics that have been effective, the author emphasizes the importance of intelligence in these operations, reviews the weaponry used, & analyzes the training of 3 elite special warfare units. Unusual & interesting action photos.