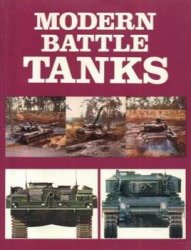 Many armoured vehicles today are referred to as tanks which do not properly warrant the name. As far as most newspaper readers and television viewers are concerned any vehicle that is armed and armoured is a tank whether it has tracks or wheels. And indeed in some cases a definition is hard to frame. But there is one class of armoured vehicle about which there can be no question as to whether it is a tank or not - the Main Battle Tank. The term first came into use in the 1950s and has replaced such classifications as medium, cruiser, and heavy and medium gun tanks.