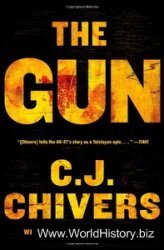 Author: C. J. Chivers
The Gun
Simon & Schuster
ISBN: 0743271734
2011
Format: EPUB
Size: 7,6 МБ
Language: English
Pages: 496
At a secret arms-design contest in Stalin’s Soviet Union, army technicians submitted a stubby rifle with a curved magazine. Dubbed the AK-47, it was selected as the Eastern Bloc’s standard arm. Scoffed at in the Pentagon as crude and unimpressive, it was in fact a breakthrough—a compact automatic that could be mastered by almost anyone, last decades in the field, and would rarely jam. Manufactured by tens of millions in planned economies, it became first an instrument of repression and then the most lethal weapon of the Cold War. Soon it was in the hands of terrorists.
In a searing examination of modern conflict and official folly, C. J. Chivers mixes meticulous historical research, investigative reporting, and battlefield reportage to illuminate the origins of the world’s most abundant firearm and the consequences of its spread. The result, a tour de force of history and storytelling, sweeps through the miniaturization and distribution of automatic firepower, and puts an iconic object in fuller context than ever before.