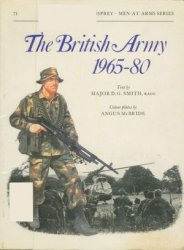 The British Army 1965-80: Combat and Service Dress (Men-at-Arms Series 71)
Author: David Smith, Angus McBride
Osprey Publishing
ISBN: 0850452732
1985
Pages: 50
Format: PDF
Size: 18.46МБ
Language: English
The uniform of the British Army underwent many changes between 1965 and 1980. This book catalogues these changes and outlines in detail the many regimental distinctions which exist throughout this old and prestigious army. Among the formations examined are the Household Division, the Royal Armoured Corps, the Scottish Division, the Queen's Division, the King's Division, the Prince of Wales's Division, the Light Division and the Brigade of Gurkhas. The text is backed by numerous photographs and eight colour plates vividly depicting the nuances of the army's combat and service dress.